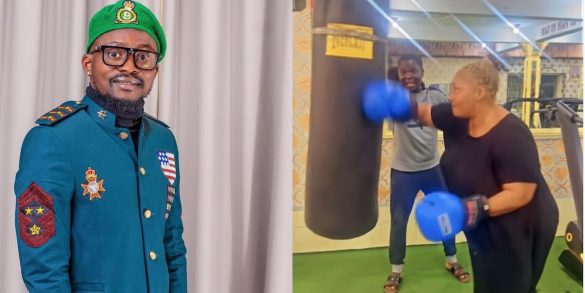 Nigerian actress Jaiye Kuti has jokingly issued a stern warning to his colleague Jigan Baba Oja to be ready for a fight.

Jaiye Kuti shares a video at a boxing training center, hitting a punching bag with her full strength.

She captions the video with:

Reacting to this Jigan reposted the video and wrote:

Motivational speaker will only collect your money ! I will do your face wotowotooooo @jayeola_monje

Nkechi Blessing, a contentious Nollywood actress, is back in the news after dropping yet another bombshell that has everyone talking.

The actress made her declaration during a live Instagram video where she participated in a conversation about marriage and whether or not it is required for a woman to get married.

However, she noted that marriage wasn’t compulsory and could decide not to marry. The actress also added that with the little money that she has, she could decide to buy a man, put him in her house and control however she likes.