The son of investigative journalist Kemi Olunloyo has finally met his father, Babatunde Ogunade, who abandoned him and his mother for 35 years without any support.

The journalist’s son disclosed this in a new Instagram post on his page and expressed excitement about meeting his father.

According to Kemi’s son, he and his father spoke about many things in his life, got to know each other and built a father and son bond.

He wrote: Finally. For the first time in 34 years of my life. I’m blessed we met. We talked about a lot of things in my life for what I do, and I’m glad that me and him are finally got to know each other and building a father and son bonding. Along with good memories.

READ ALSO:  How I Traffic Young Girls To My Husband In Italy For Prostitution – Ogun Kidnap Suspect

Reacting to the post, Kemi Olunloyo expressed appreciation to God and recalled how she single-handedly raised his son, stating it is not easy. 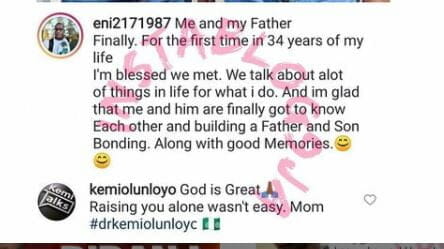