Nigerian investigative journalist Kemi Olunloyo has slammed media personality Shade Ladipo over an insensitive statement about ladies who have slept with many men.

Naijabulletin News earlier reported that Shade Ladipo, in a post shared on her Instagram story, said there’s no shame in the number of men a lady has slept with.

Shade Ladipo added that such ladies should hold their heads high as they only had sex and didn’t kill anyone, a post that generated outrage on social media.

Kemi Olunloyo knocks Shade Ladipo for saying there’s no shame in how many men a woman has slept with..

Also reacting Kemi Olunloyo, in a post shared on her Instagram page, blasts the media personality urging her to stop her foolish dirty talks as she recalled her horrible past about being molested by her father’s student.

According to Kemi, Nollywood actress Iyabo Ojo was also raped thrice, but she has never promoted sleeping with multiple people as a trophy.

She wrote: Shade I have lived with trauma my entire life. My Father’s student fingered me at 8yo while sitting on the floor when he was babysitting us. He was the one who calls me Kem Kem and why I block anyone who calls me that stupid name. It traumatizes me.

I told my mom at 53yo in 2017. It took me 48yrs. He died 2015. He was 19yo then. #alimustgoriots After I was attacked before they could rape me a man snatched me away and ran carrying me. If you didn’t hear Azuka’s interview go back and hear it. I have sexual inhibitions and managed to have 3 children and almost died being circumcised at 5yo. My vagina is the most violated part of my body. Many cannot talk. I CAN‼️

READ ALSO:  After being mocked over her ”LAWMA” outfit to the Headies Award, Eniola Badmus bags LAWMA ambassadorial deal

STOP THIS YOUR FOOLISH DIRTY TALK. THERE ARE CHILDREN READING THESE POSTS. STOP YOUR INSENSITIVITY. Iyabo Ojo was raped multiple times. She did not promote sleeping with multiple people as a trophy.

Shade you are WICKED ‼️You were raped 3 times. Two of those rapes were by the same powerful Nigerian public figure. You should be encouraging young girls and those who have them. @walejana has 4 daughters under 12yo. They should be learning from us not this nonsense. #HalimaAbubakhar was RIGHT. IRRESPONSIBLE TALK‼️ 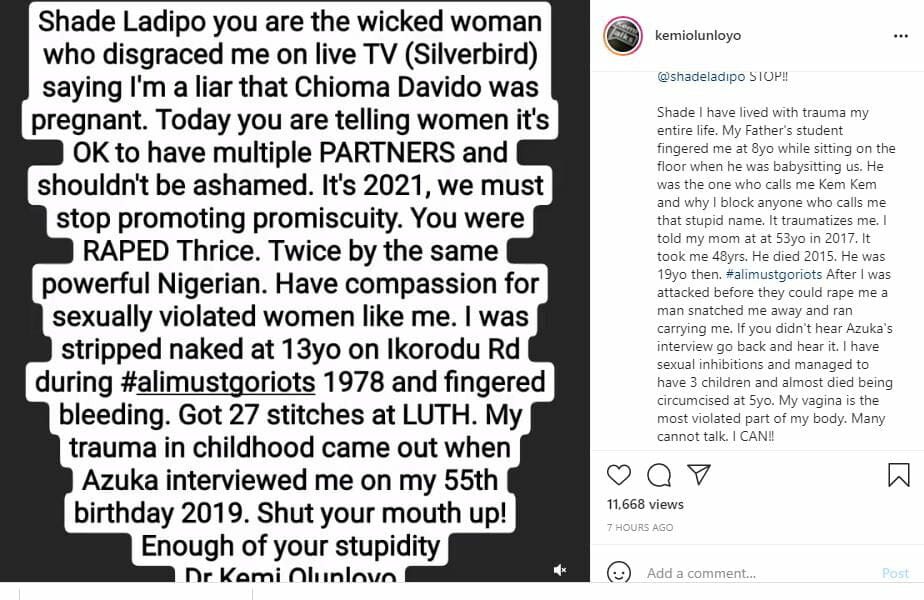 Kemi Olunloyo knocks Shade Ladipo for saying there’s no shame in how many men a woman has slept with..

‘Shut up’ Shade Ladipo under attack for blasting Tonto Dikeh over her new relationship with politician, Prince Kpokpogri