This comes after Yomi Fabiyi released a statement where he pledged support to alleged rapist, Baba Ijesha. In the statement, Yomi also blasted everyone criticizing the accused without any evidence to back it up.

According to @actoryohan, she is not surprised Yomi is supporting someone accused of rape because he has attempted to rape her too before.

Explaining in details @actoryohan said Yomi attempted to rape her when she approached him to join the movie industry. She said Yomi invited her to his house to fill a form she paid N35,000 for and that was where he seduced her and threatened to make life miserable for her if she does not agree to have sex with him.

Read all @actoryohan wrote below; 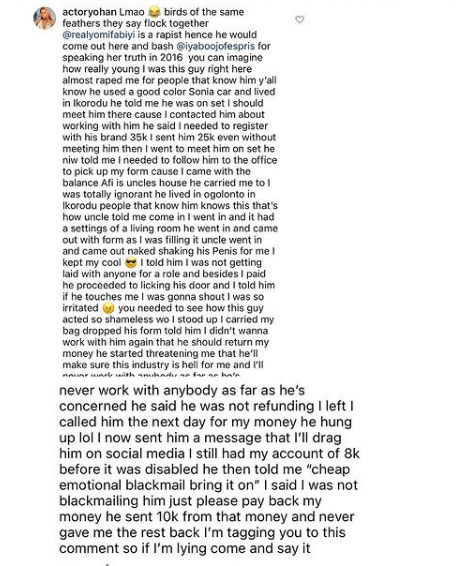 @mirayor03 wrote “So he’s also into it… no wonder… Oloriburuku activist isonu.. supporting striker awon olofo.. onidi benbe.. waiting for evidence before u support someone that was molested/raped.. nkan nse Yomi Fabiyi o.. boya u shud go to panti and ask for evidence OLD FOOL.”

@leadway_store wrote “They don’t always name this Yomi Fabiyi in good places, it’s either in burial programs, fights or rape cases…… Thunder fire you Yomi, may you witness beyond this in million folds…”

My dad died prematurely, but sent us Christmas gifts through a friend who doesn’t know he’s dead – Nigerian lady narrates