Laide Bakare bows to pressure, goes against her 5years promise as she does the unexpected » Naijabulletin
News

Laide Bakare bows to pressure, goes against her 5years promise as she does the unexpected

The actress went against her promise to keep her daughter’s social media handles private till after 5 years.

News reported that Laide Bakare had revealed why she kept her daughter, Simi, away from the public.

A follower had questioned why she had been hiding her daughter, and the actress responded by saying that her 13 years girl was too hot and she still had 5 years more to go before publicizing her handle.

Laide Bakare said; “because she is too hot for 13yr old noni o. Before uno go say fake Age Again, Abeg I’m not tagging her ooo she still has more than 5yrs”.

In a new update, the controversial actress couldn’t keep to her words as she revealed her daughter’s Instagram handle to her followers.

Showering love on her, Laide described her daughter as a smart and family oriented girl.

She urged her fans to follow her daughter’s page as the 13 year old had lots of contents to offer.

“I love a smart girl and a girl who loves her family, At last simy is here. Fell free to follow her pls, she has a lot to offer”.

News recalls Laide Bakare had revealed the type of business her 13-year-old daughter engages in, which afforded her the opportunity to buy her 9-year-old brother a Benz.

Proving that her daughter can afford such luxury whip, Laide Bakare revealed her multi-millionaire business.

Laide Bakare stated that her daughter is the Boss of Slimline Properties.

She wrote, “I am the one and only Olaide Bakare CEO Slimline Properties and my 13yr old Similoluwa Olatokunbo is my boss. Come to my DM let talk about money-making ventures. And I’m sure your life is gonna change for good. I love you. Jummah Mubarak my lovers”. 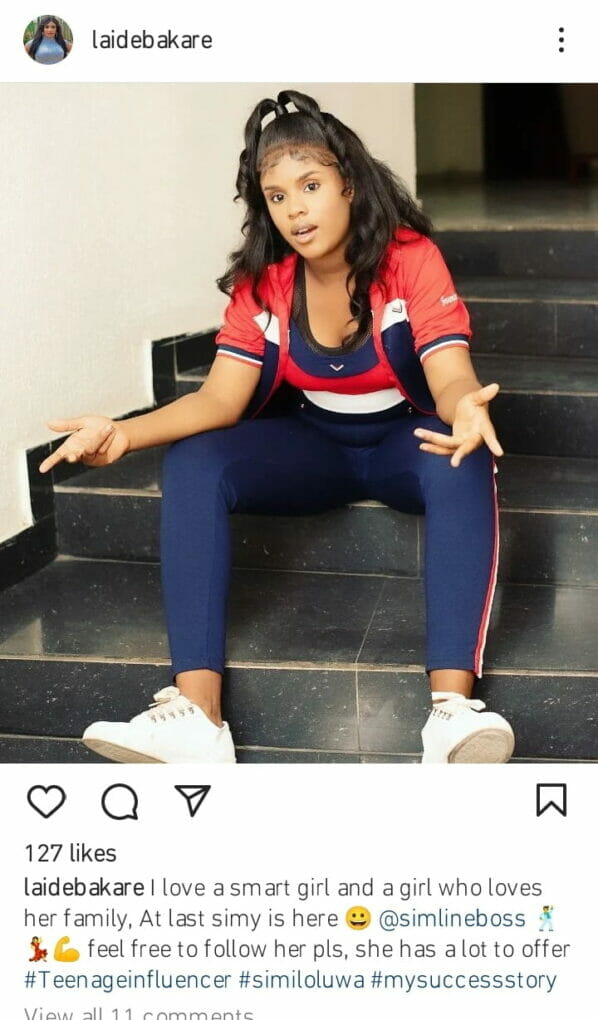 Laide Bakare bows to pressure, goes against her 5years promise as she does the unexpected