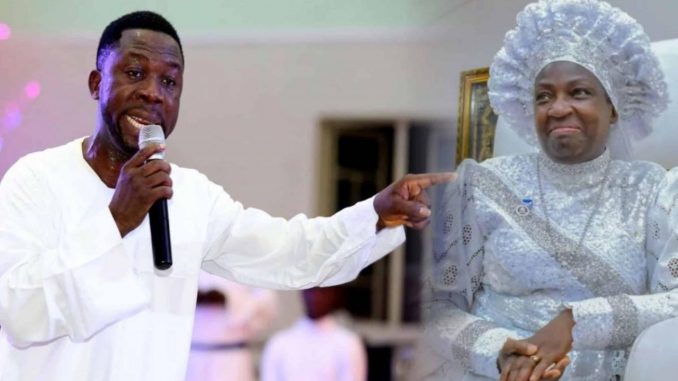 Videos that emerged online, captured Genesis, who took a swip at Iya Adura during a Sunday service programme.

Genesis alleged that Iya Adura had abandoned his family when he was arrested over alleged fraud activity. He claimed the highly referenced prayer mother removed all his photos from their official social media pages because he was going through a though phase.

Genesis recounted how he had served Iya Adura meritoriously, even to the extent of abandoning his ministry.

He, however, showered prayer and prayers on veteran actress Mama Rainbow who checked up on him and his family regularly during his trial, even without her financial assistance.

Although Genesis did not mention Iya Adura’s name in his words, numerous pointers from his statement made it clear he was referring to the female cleric.

He referenced when Iya Adura helped a young orange seller identified as Ayomide, how she helped the late Baba Suwe when he was sick and how he had served under her with all his heart.

In his statement, he mentioned that his mother is the only ‘Iya Adura’ he knows.

A video making waves on the internet captured Lanre Teriba blastin Genesis over his rude comments to Iya Adura. He issued 24 hours ultimate for Genesis to apologize to the self acclaimed philanthropist.

A caption shared online by Seun Oloketuyi, was a warning from Pelumi Olajengbesi to singer Lanre Teriba against threatening Genesis and to desist from involving in the rift.

He wrote: Lanre Teriba Atorise is advised to quickly caution himself with his nature of utterances in the dispute between Prophet Israel Ogundipe Genesis and Reverend Mother Esther Abimbola Ajayi.
He should control his emotions now, nothing under the law gives him the right to threaten anybody. A threat is a crime under the law. The law allows an aggrieved person to express himself or herself just like Genesis has done, but the law will jail a person who threatens another even if he has not carried out his threats. Atorise is well advised because if anything happens to Genesis negligently, Atorise has bought a case he did not pray for. The person to apologise in 24 hours. 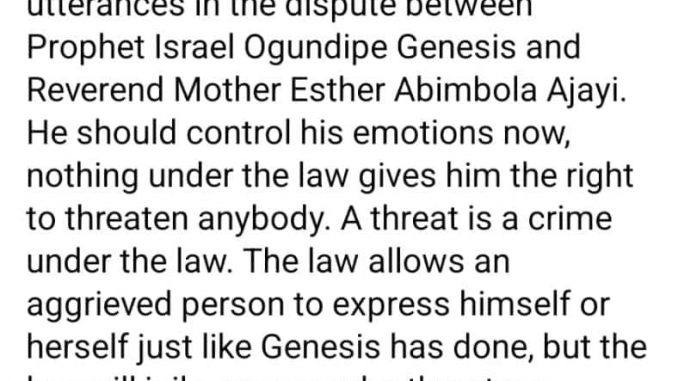