A Nollywood actress identified as Bamidele Omobolanle has called out her colleague, Murphy Afolabi, for allegedly threatening to ruin and kill her. 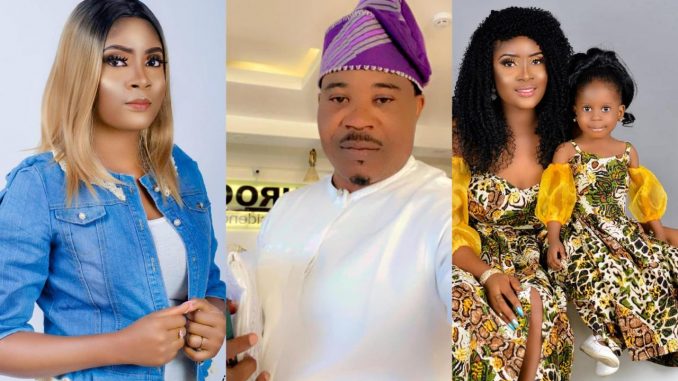 An online report alleged that Murphy Afolabi abandoned his daughter, Adesua, whom he fathered with Bamidele Omobolanle.

The post also alleged that Murphy Afolabi abandoned his daughter and refused to do the needful to the upcoming actress.

According to the actress, Murphy Afolabi abandoned her and their daughter for over five years, and she had been taking the responsibilities.

The beautiful actress claimed she was chased with charm whenever she tried contacting the actor. She also disclosed how she had been running helter and skelter for her life.

She wrote: Pls, everyone come to my rescue!!! Murphy Afolabi and his Alfa ( fellow ritualist have been threatening my life with death and bullying me into silence for 5 years now.. Let the world know am dying bcos of my child! I am tired!I am not keeping quiet anymore.

This move was after Murphy Afolabi linked up with three of his abandoned children.

The actor delighted his fans with beautiful photos of himself and his three children, bonding while they geared up for the weekend.

Murphy Afolabi, who shared the photos on his verified Instagram page, claimed love is the oil that eases the friction and the cement that binds a family together.

He wrote: “In family life, love is the oil that eases friction, the cement that binds closer together, and the music that brings harmony.” Happy weekend to you all, much ❤️

Kemi Filani recalls that Murphy Afolabi took a swipe at those mocking him for his deeply rooted Yoruba accent.

In an interview with BBC Yoruba, the actor claimed his accent resulted from his origin, and nobody would understand him if he tried to force an accent.

He further disassociates himself with anyone who does not feel comfortable talking to him due to his accent, as that is how he will continue talking till old age.

He said: “There is nothing like someone is making fun of me. Your place of birth is your state. You can’t give birth to someone in Osun state and then you go to Lagos and say you want to have hairs like your father. I was given birth to in Osogbo and everyone knows that in my village, the way we pronounce our ‘S’ is different from the others. if you want to force yourself to speak like a Lagosian, people would hardly hear you. This is the way I’ll talk till I grow old. Whoever doesn’t like it should not play with me.”