“Living with her was hell” Funke Akindele’s stepson allegedly reacts to their marital crisis, exposes the actress (Details)

Funke Akindele has been exposed for allegedly being temperamental and for controlling her husband, Abdul Bello better known as JJc Skillz.

News reported hours ago that more bombshell were revealed about Funke Akindele and her husband, JJC Skillz alleged marital crisis.

Cutie Julls had revealed some issues surrounding their marital situation.

According to the Instagram blogger, JJC Skillz, before joining Funke Akindele in Nigeria had an initial understanding that the SceneOne production would be a family business having the duo as certified owners.

However, Funke Akindele has never stopped acting and making it clear that she’s the owner of SceneOne production and only allowed JJC Skillz to have a decent amount of money.

The source also revealed that aside from the SceneOne company, the couple also agreed to take up private jobs, but Funke Akindele always came up with excuses why JJC Skillz should not take private jobs.

The blogger alleged that Funke Akindele rudely scolds JJC Skillz even when third parties are in their home.

Reacting to their marital crisis, JJC Skillz’s son has allegedly spoken out on and has dropped more bombshell about the actress.

Cutie Julls dug up a comment he made on their marriage issues on a blog.

He revealed that living with the actress for 2 years was horror.

He added that his step mother isn’t who she paints herself to be in the public eyes.

“I lived her for 2 years, the house was a horror site.
She’s not what you all think she is”. 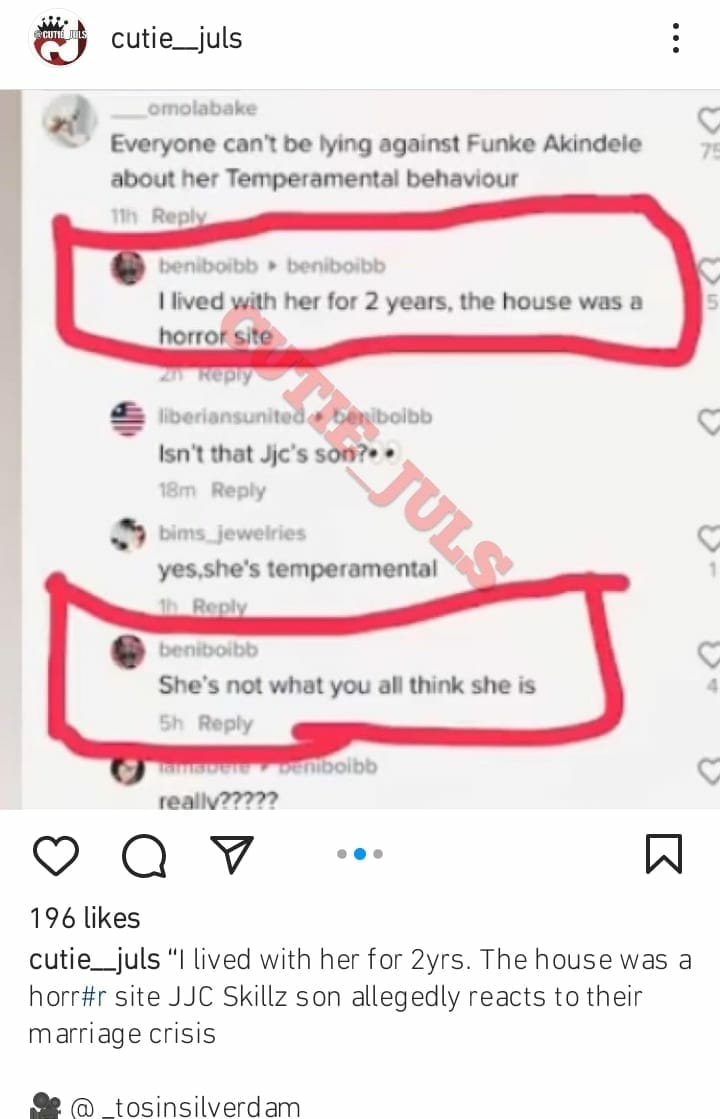