“Make sure you get married because you want to, not because you owe them anything” – Socialite, Pretty Mike advises › Naijabulletin
BREAKING
Published on: September 29, 2021

Popular socialite, Pretty Mike has advised people to get married because they want to, not because they owe their partner anything.

Pretty Mike stated this in response to a viral question making rounds on social about who a person should marry between the one who stayed with them when they had nothing or the one who helped them become somebody.

Taking to his Instagram page, the controversial Instagram celebrity noted that even though it is rare to find loyalty, make sure you love the person before deciding to marry them.

To buttress his point, Pretty Mike shared a true life story of a man who married his benefactor because he felt indebted to her, but the marriage didn’t last.

“I’ve been seeing this post a lot in the last two days. I will tell you one thing before I tell a real life story, you see loyalty… it’s rare to find. Especially when you are in a position with nothing to offer and even when you are financially able and someone still sticks by you without exploiting or taking anything off you, just know you are lucky.

I remember a lady from years ago, when I first started business. She wasn’t easy on the eye but she had mad connect and a lovely personality . She met this handsome young man with absolutely nothing to his name and with her connections, she got him rolling in oil and gas. He amassed a lot, and then the girls started flocking in like flies to honey.

He felt he owed it to her to Marry her and she felt she was making her husband. But from the look of things,

there was no love on his end. He frustrated this woman. There were too many girls, I just kept wondering why she wanted to sign up for this. She was heavily pregnant when she started drinking heavily and was

The day of the wedding.. she didn’t even wear makeup ( just to show you the level of the frustration),

It was like she just wanted to be done with it and get back to her depression. After the wedding I didn’t see her again but I’d heard from a friend that she’d miscarried ( I hate to say this but some part of me wasn’t surprised..the stress and drinking was that much).

I know I am not married and I am probably not in the position to even give relationship advice but I do know one thing. if you are going to get married to someone, make sure it’s because you want to …

not because you OWE THEM ANYTHING. 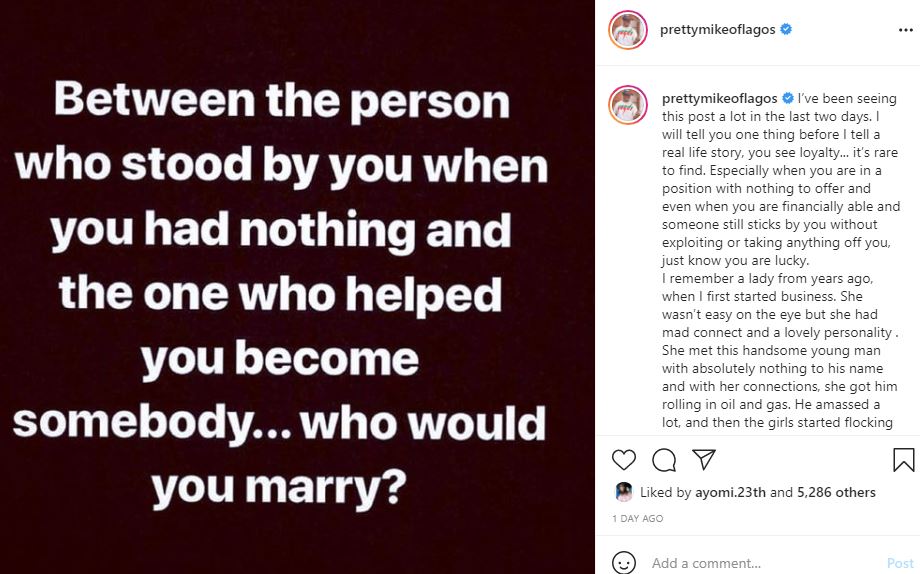