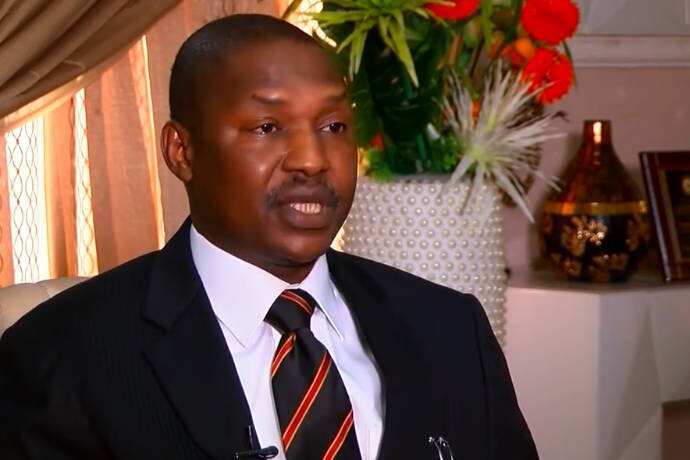 The NFIU bill has since been passed by the National Assembly and was assented to by President Muhammadu Buhari in July 2018. Malami’s contributions in facilitating the prompt passage of the Nigerian Financial Intelligence Agency Act prevented the expulsion of Nigeria from the EGMONT Group. MALAMI’S GIANT STRIDES IN PRISON DECONGESTION From available records, the inmate population at the various centres across Nigeria currently stands at 74,127, out of which 52,226 inmates are awaiting trial persons (ATPs). Since the inauguration of the Presidential Committee on Prisons Reform and Decongestion (Presidential Committee on Correctional Service Reform and Decongestion), chaired by the Chief Judge of the High Court of the Federal Capital Territory, Justice Ishaq Bello, no fewer than 7,813 inmates had benefitted from the programme.

A total of 3,789 inmates have been released from the Nigeria Correctional Service Centre since the outbreak of COVID 19 pandemic in the country to curb its spread among inmates. Since the inauguration of the committee on October 31, 2017, it has so far visited 32 prisons in 14 states. Malami is equally credited with aiding the success of the federal government’s initiative deployed to address the challenge of dealing with the army of arrested Boko Haram suspects, who were kept for years in various detention centres, unattended to by the previous government. The need to decongest correctional centres cannot be over-emphasised, considering the deplorable condition in the centres. The committee, among other functions, is saddled with the task of coming up with a roadmap for the prison de-congestion program, providing a comprehensive user-friendly approach for tackling the problems bedevilling the Nigerian prison system. The committee will also provide an insight into the past and present efforts of the federal ministry of justice and other stakeholder institutions, towards repositioning Nigeria’s prisons system via strategy deployment of technology and the implementation of the virtual automated case management system, for the decongestion of prisons in Nigeria.

The outstanding achievements of the committee so far have been possible because of the sweltering passion and vision of the Malami whose zeal for a better Nigeria is unparalleled and commendable. MALAMI’S CHARITABLE ACHIEVEMENTS IN HIS STATE Kebbi state has got in Abubakar Malami, SAN a worthy ambassador committed to the development of the state and the nation at large. Though he chose to keep himself away from singing his eulogy or blowing his trumpet, it is not surprising that pundits conspicuously noted Malami’s silent but salient landmark achievements that earned him recognition in the sight of the Kebbians and state elders. One area which Malami stands out among the political class in Kebbi state is his quest to see that many indigenes from the state are given the opportunity to serve their nation in executive capacities of many federal government agencies. It is on record that Malami had facilitated the appointment of more than 45 persons into executive position ranging from chief executives, executive directors and board members of different department and agencies of the federal government and more than 30 of them are Kebbi state indigenes.

Providing an opportunity for employment is what Malami consider as the best form of empowerment for the teaming youth of Kebbi state. In this regard, over 405 youth more than 85% of whom are of Kebbi state origin have been gainfully employed into different agencies of government and parastatals courtesy of Abubakar Malami, SAN. As a committed Kebbi state indigene with an unmatched passion for knowledge, the minister has facilitated the provision of federal government scholarship to a number of Kebbi state indigenes to advance their knowledge at higher academic institution at home and abroad. In terms of physical and infrastructural development to the state, Malami left no stone unturned in following up with the relevant federal government agencies to ensure that Kebbi state is not shortchanged in the infrastructural development of the Buhari-led federal government. As a member of the Federal Executive Council, he has promoted and supported the release of funds for the ongoing work on Yauri-Kontagora road. He has been liaising with the Emir of Yauri and other relevant stakeholders in that regards.

Recently, the Nigerian media space reported that the Emir of Zuru, His Royal Highness Alhaji Sani Sami Gomo II, sent a delegation in appreciation of the enormous contributions of Malami to nation-building and specifically for being a worthy ambassador of Kebbi state. These elders are believed to be a goal-oriented apolitical class that are committed to the development of their territories. Other aspects of development brought to the state courtesy of his efforts to ensure the appointment of Kebbi indigenes to represent the state and complement his efforts and struggle for the state include agricultural and farmers support programs facilitated thorough the Sokoto Rima River Basin Development Authority such as; • Bangola Dam construction and Erosion control at Gulma (work in progress). • Construction of an Earth Dam in Koko work. • Siting and preparation for the construction of a Songhai Model complex in Bagudo for ranching and other activities.

• Distribution of power tillers and water pumps in Bagudo, Gwandu and other rural areas in the state. • Erosion control; distribution of waters pumps and Tube Wells Bagudo and Gwandu. • Distribution of Fertilizers • Approval for the construction of a Dam in Ngaski. He is currently liaising with the federal ministry of agriculture to ensure inclusion of the following communities in the Massive Rural Interventions Programme of the Ministry. 1. Bayan filin sukuwa, Ambursa, kardi, Morida, Kola, Lagga, Ujariyo and Wuro maliki community in Birnin- Kebbi LG 2. Bunza , Zuguru, Tilli, salwai and Zogirma Community in Bunza LG. 3. Kalgo, Loko, Magara and Anguwar Aduwa in Kalgo LG 4. Gwandu, Gumbai and Wuro Yandu community in Gwandu LG. 5. Dakingari, Suru, Kwakware, Dalla and Barberejo community in Suru LG. 6. Lailaba and Gulma community in Argungu LG. 7. Kangiwa, Aljanna haske, Masamar daji, Kunch Gumundai in Arewa LG. 8. Tundun Bichi, kangon wasagu community in Wasagu LG. 9. Fakai Maikende, Mahuta, Bajida and Marafa community in Fakai LG. Not only Kebbi State, but other states are also beneficiaries of his efforts and representation in the federal cabinet. Recently, the Federal Mortgage bank thorough the complementary efforts of one of these executive appointees complemented by the minister’s efforts wanted to sight a federal housing project in Kebbi state, but because of some challenges that include nonpayment of state’s contribution, the project was taken to Sokoto state so as to keep such development within the north-west and our neighbouring state. Other efforts of the minister include a request to the Primary Health Care Development Agency for the rehabilitation of some health centres in our rural areas which have been processed. He had also made personal efforts to reach out to Universal Basic Education Commission (UBEC) for the construction of additional classrooms in the following Primary Schools in rural areas;

READ ALSO:  ‘We are completely devastated’ – Vanessa Bryant breaks silence on deaths of her husband and daughter in fatal helicopter crash

1. Waziri Umaru Model Primary School Birnin-Kebbi, Birnin-Kebbi LG 2. Umaru ilalu Model Primary School, Birnin-Kebbi, Birnin-Kebbi LG 3. Sarki Sani Moddel Primary school, Argungu, Argungu LG 4. Ninzamiyya Model Primary School Yauri, Yauri LG 5. Wasagu Central Model Primary School Wasagu, Danko/wasagu LG 6. Rafin Giwa Primary School Kwakware, Suru LG The Rural Electrification Agency recently commissioned a 90KVA solar hybrid min grid in Karaye, Dadin Kowa and Tsulayi communities in Arewa local government and the minister had since forwarded a further request for the following rural areas; 1. Unguwar Sani and Unguwar Dole in Birnin – Kebbi LG. 2. Bani umbu and Wasali Sabon – Gari in Dandi LG. 3. Farin Dutsi, Mera and Kwaido in Augie LG. 4. Kumbobo, Tungan wanan and Tungan – Sule in Bagudo LG. 5. Zaria, Jadadi, Samanaji and Lani in Koko/ Besse LG 6. Ida, Sagwarradda, Kuka- Kogo and Gidiga in Maiyama LG. 7. Runtowa and Ruggar Barko in Aliero LG. 8. Jadadi and Fagad in Jega LG. 9. Maza- Maza, Unguwar Skoka and Doka in Sakaba LG. All of these developments were brought to the state notwithstanding the nature and national outlook of his office as the minister of justice and Attorney General of the Federation. Mindful of the weight of that office and the need to represent his state well and the region he came from, also appreciating the fact that he is the first in the region to hold onto that position and among the very few in the country to hold it for that long, Malami had proven to be a dynamic and energetic minister who demonstrates legal acumen and a-second-to-none commitment in carrying out the functions of his office as well as an unalloyed loyalty to the present administration in its doggedness in the fight against corruption.

Kebbi state has a cause to celebrate this distinguished Attorney General of the Federation, who was instrumental to the actualization of the cardinal agenda of the All Progressives Congress’ Buhari-led federal government, especially the fight against corruption. As a nationalist, Malami has represented the country in a number of international fora and signed mutually-beneficial memoranda of understanding on behalf of the federal government. To complement government efforts in seeing development to the state, Malami has made personal efforts through the establishment of the Khadi Malami Foundation. The foundation has been helping the sick and needy with the provision of food, education support for students, capital for small businesses, and constructions of boreholes for rural communities among others. It is on record that in less than a year the foundation had helped more than 60 patients around the state with health support funding, more than 50 students with educational support; others include marriage support, business support, and special support among others covering an additional 111 persons. The foundation has in its register more than 130 households for maintenance support and 107 persons for monthly support. The minister’s Khadi Malami Foundation also engages in the rehabilitation of Islamiya schools and feeding of school operating the almajiri system around the state. Your own opinion articles are welcome at info@corp.legit.ng— drop an email telling us what you want to write about and why. More details in Legit.ng’s step-by-step guide for guest contributors.