A man, identified as Chukwudi Collins Chukwudi, has been killed by a vigilante in Ebonyi state just eleven days to his white wedding.

It was gathered that the 29-year-old man had attended a wake-keeping in Ohaozara Local Government Area of the state on Tuesday, April 20, when the trigger-happy vigilante allegedly shot him dead.

The Enugu-born man had his traditional wedding on March 6, 2021, and the white wedding was slated to hold on May, 1 2021, in Enugu state before the unfortunate incident occurred. 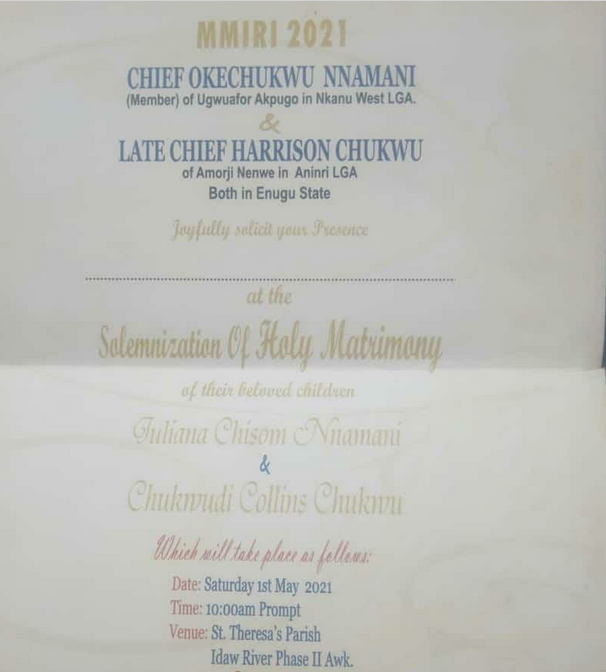 A friend of deceased, Innocent Ezeogo, who also went for the wake keeping, said the vigilante approached them shortly after they arrived at the venue and insisted on firing a shot in their midst. However, they declined his offer and when they were about to leave the venue, he opened fire and shot Chukwudi.

“I am his friend, we attended a wake at Nediokpa Village in Okposi when a gun-wielding man, identified as Hosanna Aju, opened fire on him. The gun man approached us shortly after our arrival at the venue and insisted to fire a shot in our midst. We protested against the move and when we stood up to leave the venue, the gunman shot my friend dead,” Ezeogo said.

The deceased’s fiancée, Juliana, who is still in utter shock, has called on the police to ensure justice is served.

“I tried all my best to stop him from attending the wake but to no avail. We are to have our wedding on May 1, but look at me. I am devastated,” she said.

The State Police Command’s Spokesperson, DSP Loveth Oda, revealed that the suspect is not a vigilante in the said community and they can’t explain how he got the gun.

“He could not explain the source of a locally-made double barrel gun, which he allegedly used to commit the crime,” she said.

DSP Odah added that the plans have already been concluded to arraign the suspect. She also appealed to people to always report any person found in illegal possession of a firearm.

If she doesn’t spend 0n you, it means she doesn’t like you – Danny Walter tells fellow men