Man reveals how Singer Wizkid paid for his mother’s surgery…

This is coming a few days after Davido donated the money generated via his NIm birthday challenge to charity across Nigeria.

In the post shared on the microblogging platform, the man revealed that Wizkid paid for his mother’s surgery and made his year with such a kind gesture.

While responding to a man who wished his mother a successful surgery, David Anthony said they had done the surgery, and it was successful.

The post reads: Omo I can’t keep my cool mehn. This man @wizkid just made my year!! Love you like crazy broo!! Damn, he paid for my mother’s surgery! I dey speechless mann! I felt helpless mann!! That woman is my world. It’s done and was a successful one.

News recalls a throwback video of Wizkid performing on stage that surfaced online and generated several reactions from Nigerians.

There is a saying which reveals that one should not despise the days of little beginnings such that when one successfully live a life of fulfilment, those days come as memories. However, the memories of Wizkid as an upcoming star also made a huge difference.

In the video that surfaced online, Wizkid was captured performing on stage but with great effort to impress his audience unlike his present stressless method of making performance on stage.

Wizkid has built up his career to an international level and has deserved recognition judging from his past experiences.

Reacting to this, many Nigerians have showered praises on the singer for his remarkable evolvement in the Nigerian music industry. 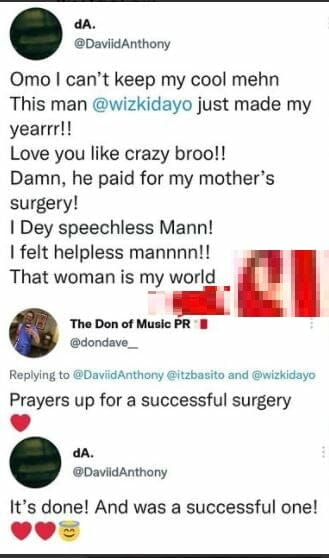 Man reveals how Singer Wizkid paid for his mother’s surgery