Many people only mess with you when you’ve blown’ Comedian Bovi spills as he goes down memory lane » Naijabulletin
BREAKING
Published on: September 21, 2021

Comedian Bovi Ugboma has taken to social media to share his tough experience while trying to be famous.

Sharing a post, he started off from a very rough patch and recounted how he rejected an offer of 200k for a commercial that will air his pictures on billboards for a whole year after a piece of advice from his manager Ann Obaseki.

The comedian was later offered 10 times his initial amount for the same commercial due to his talent.

The boss who granted him the opportunity saw his performance about four years earlier and developed a sense to work with him, even though that performance was the day he was emotionally and mentally abused, still he had to act funny.

Appreciating the same boss whose name is Steve Babaeko, he revealed that many people mess with you when you have blown since it was as a result of his performance he was called back that year.

In naija, many people only mess with you when you’ve blown
This is @stevebabaeko ! In 2012, I was called to inquire about my availability for a commercial shoot for diamond bank. The lady on the other side of the phone was professional but sultry at the same time. With her seductive

voice, she convinced me that all they could afford was 200,000 naira. I fell for her charm and agreed. Enter @annobaseki. I called her to tell her the deal I just struck and she went berserk! She asked me how

much I earn per gig. Then followed up with the question “so why will you be on a commercial that will show

for one year and with your pictures splashed all over billboards across the nation”. I felt so stupid. I called the

lady back and told her I made a mistake and I will respectfully turn it down. She pestered but I refused. I even suggested someone who I knew was good and she could use. That was @odogwu comedian ! He went for the

screen test. She liked him and she sent all these reports back to @stevebabaeko! Steve’s instruction was simple

and straight; “no one but Bovi”! The lady came back and started to beg me to come back to the negotiation table.

So I handed her to @annobaseki ! @annobaseki got me a better deal! Exactly ten times the initial amount. And

that’s how I ended up on set the next day. When I saw Steve I didn’t remember him honestly. And he told me,

“I saw you perform 4 years ago in Cotonou when I was in BAT. And I knew there was something about you.

This ad was written with you in mind and that’s why I insisted”. The day he referred to 4 years earlier was actually my worst day of that year. I had been emotionally and mentally abused. I performed reluctantly that night.

The jokes were funny but I wasn’t. But Steve saw something. The advert went on to be advert of the year for 2012. And his insistence opened me up to all the wonderful people I met and worked with in that bank till tomorrow!

If Steve didn’t insist, I wouldn’t have had that quantum leap! Thank you Uncle Steve. And thank you guys fo 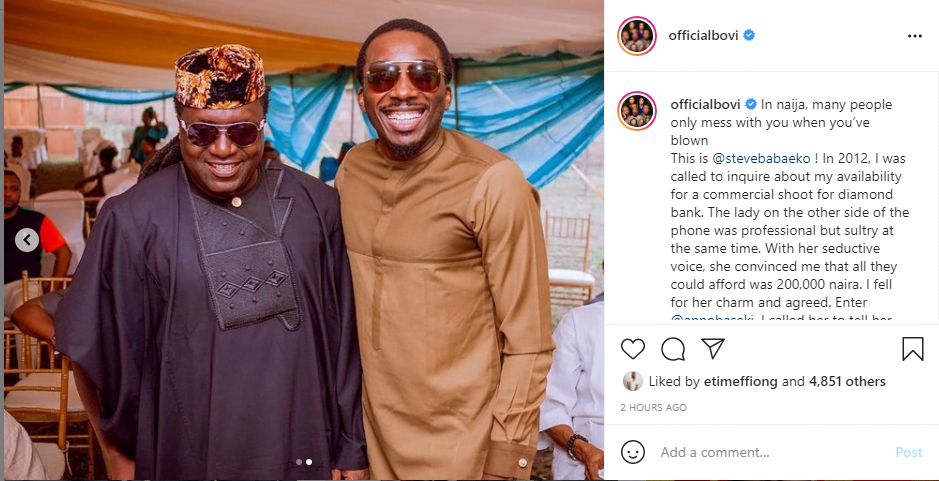 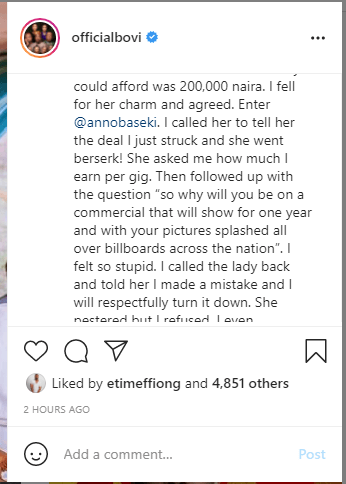 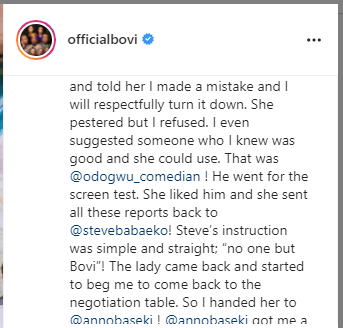 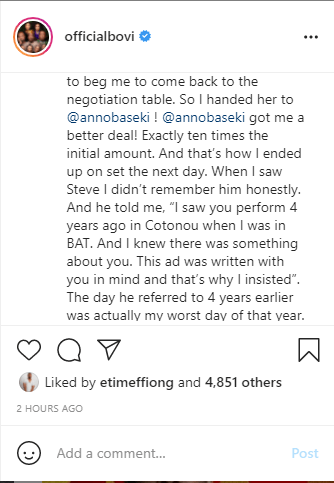 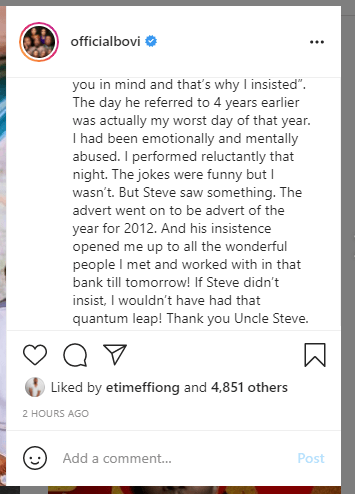 Comedian, Bovi under fire for saying he never wanted a girl child

‘You took the ugliness from your father’s village’,Bovi’s wife to her daughter during a hilarious argument