‘Mr Eazi got into the billionaire family, but you couldn’t get a blue passport’ Nigerians mock BBNaija’s Neo

News earlier reported that a lovely video making the rounds online captured the moment Mr Eazi went on his knees, brought out a ring and popped the usual question, ‘will you marry me?

Temi Otedola was left surprised as she kissed Mr Eazi before accepting the ring, and the duo hugged themselves.

Many social media users expressed excitement over the video, saying they had been expecting the proposal of the lovebirds.

Meanwhile, some people claim that Mr Eazi is marrying Temi Otedola because of her father’s money, while others claim the singer is also a billionaire.

Reacting to this, Neo, in a post shared on the microblogging platform Twitter, Neo expressed excitement that Mr Eazi and Temi both made the engagement happen.

However, this earned him backslashes as some netizens mocked him for failing to secure a blue passport by ending his relationship with Vee.

Bensire wrote: Awww Mr Eazi got into the billionaire family but you no blue passport.

Baby wrote: You and Vee should do it too.

The once envied couple had been in the news over the reported crash of their relationship, which fans had thought would lead to marriage.

In an update on their relationship, Vee and Neo unfollowed each other on the photo and video sharing platform Instagram.

Unfollowing and blocking people on social media is one of the widely speculated ways to ascertain the crash of a relationship or if people are no longer friends. 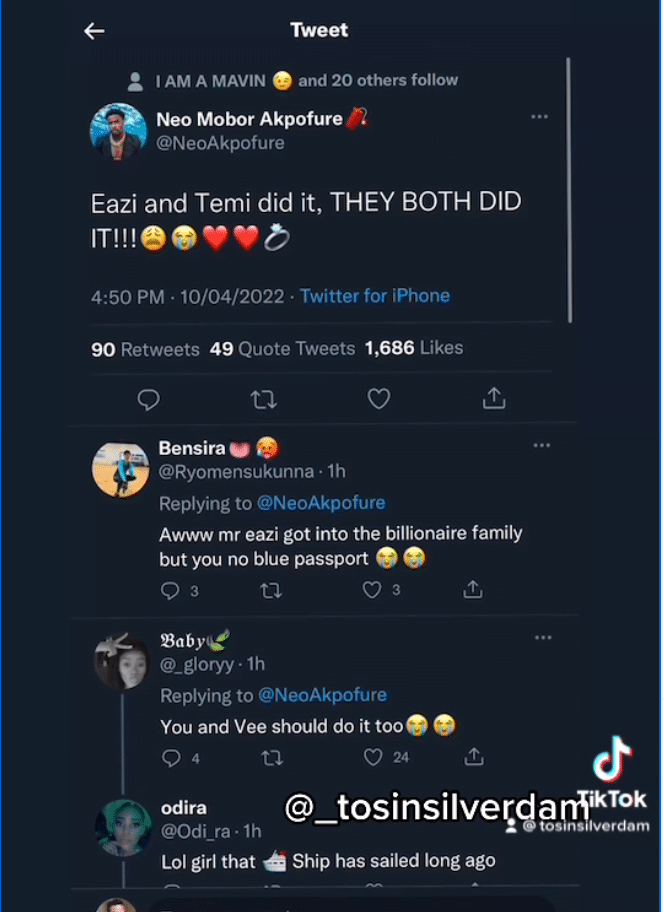 ‘Mr Eazi got into the billionaire family, but you couldn’t get a blue passport’ Nigerians mock BBNaija’s Neo