The Chief of Army Staff, Lt-Gen Tukur Buratai, said on Monday that the Nigerian Army had evolved over the years and was no longer for school dropouts and never-do-wells.

Buratai spoke in Ibadan, the Oyo State capital, during the sensitisation and enlightenment campaign for candidates who want to enlist in the Nigerian Army 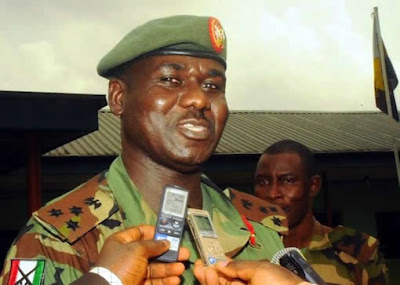 The COAS, who was represented by the Director, Army Recruitment, Resettlement and Reserves, Brig-Gen Emmanuel Akpan, was received by the Commissioner for Youths and Sports, Mr Seun Fakorede, on behalf of Governor Seyi Makinde.

In his address at an interactive session, Buratai said, “I envision an army where every soldier will be able to think and fight, fight and think, have the capacity and the cognitive ability to think critically, be very creative, take rational decisions, with or without any supervision and without any problem whatsoever.”

READ ALSO:  Watch how this Pastor throws money from BMW while performing in Anambra (photos and video)

He said the Directorate of Recruitment, Resettlement and Reserves of the Nigerian Army had conducted similar exercise in Enugu, Abia, Imo, Ebonyi, Akwa Ibom, Rivers, Bayelsa, Delta and Lagos states as part of a nationwide sensitisation and enlightenment campaign tour of the 36 states of the federation and the Federal Capital Territory.

Buratai said, “The Nigerian Army has evolved tremendously over the years. It is no longer an organisation that is considered for dropouts, never-do-wells and dumbheads, especially under the watch of the current Chief of Army Staff.

“You are expected to have four credits at two sittings, including English Language and Mathematics. The age limit for non-tradesmen is 18 to 22 years, and for tradesmen, it is 22 to 26 years. Every citizen of this country is given the opportunity to enrol into the Nigerian Army under the watch of Chief of Army Staff.

“Five per cent of every recruitment conducted in the state is given to the female gender. The trainings are not the same. We appreciate all of that and we give them different criteria, which they must pass through if they are coming for recruitment into the Nigerian Army.”

Meanwhile, the Oyo State Government has urged the Army to provide a level playing field devoid of ethnic and religious sentiment in the exercise in ensuring that qualified youths in the state were enlisted into the Special Force Unit.

The state Commissioner for Youth and Sports, Seun Fakorede, who represented Governor Seyi Makinde on the occasion, expressed government’s readiness to support the Nigerian Army for the success of the exercise.

VIDEO: Lovely moment Nigerian soldier surprised his girlfriend by proposing at her workplace