The death of the veteran Nigerian actor Rich Oganiru has circulated the social media platforms and has generated so many reactions from Nigerians.

It is a tragic shock the Nollywood movie industry has witnessed another heartbreaking loss a few weeks after the demise of veteran actress Rachel Oniga.

According to the source, the actor passed away yesterday, 10th, August 2021 after battling with an illness for months.

Two weeks before his death, the actor announced to the public in a video for financial assistance over his health on his dying bed.

READ ALSO:  Landlord Refuses To Rent An Apartment To Man Because He Has Three Single Daughters

However, Nigerians are pained that the deceased came online despite being sick, begging to solicit funds to take care of himself which later ended in sorrow.

@iamrealebere wrote: You will see all of them posting his pictures up and down but none did remember to post him when he was alive, this nollywood is the most wicked industry I have ever seen, Rip sir

READ ALSO:  “My wife is just beside me snoring like an idiot, fat fool” – Heartbroken wife leaks husband’s chat with his side chick

@o.g_creation wrote: Chaiii the way this actors dies eeh,he has been out of screen for long yet no one asked after him..

@pocolization wrote: No actor bring money to save am now oooo later them go spray money for burial.. if na OBA now them go show 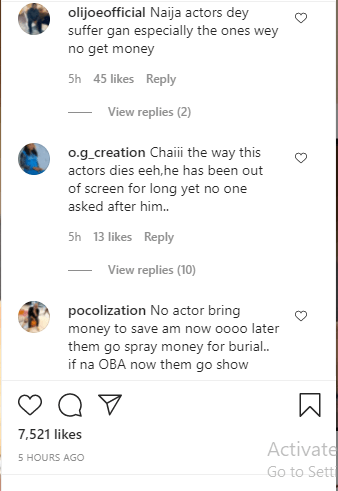