My growth is one thing that scares’ Nkechi Blessing amazed at her latest achievement» Naijabulletin
BREAKING
Published on: September 17, 2021

Controversial Nollywood actress Nkechi Blessing has expressed appreciation to her fans and followers as she attains another milestone on the photo and video sharing App.

Nkechi Blessing has hit two million followers on Instagram, and she’s excited about it, promising her fans that she would not take their love and support for granted.

According to the actress, her growth scares her, and amidst the hates, negativity and insults on social media, she has grown to become a better version of herself.

She wrote: 2 Million Organic NBS Armies My growth is one thing that scares even I myself, I mean from all the hates, negativity and insults I was bent on growing and becoming a better version of myself cus really all those are mere distractions from those who wish they had my life But Mehn THANK YOU all for sticking with me thru it all Heaven knows I do not take your love for granted. THANK YOU.

naijabulletin News recalls Nkechi Blessing recently asked that the people delete the version of her in their head.

READ ALSO:  Actress Nkechi Blessing sends messages to people who are waiting for her bad news

According to the 32-year-old, the version of her that most people have in their head is outdated and she has turned a new leaf.

“Delete the version of Me you have in your head..It’s OUTDATED ….New Rules…Good Morning World #unstoppable #ogoagbaye” 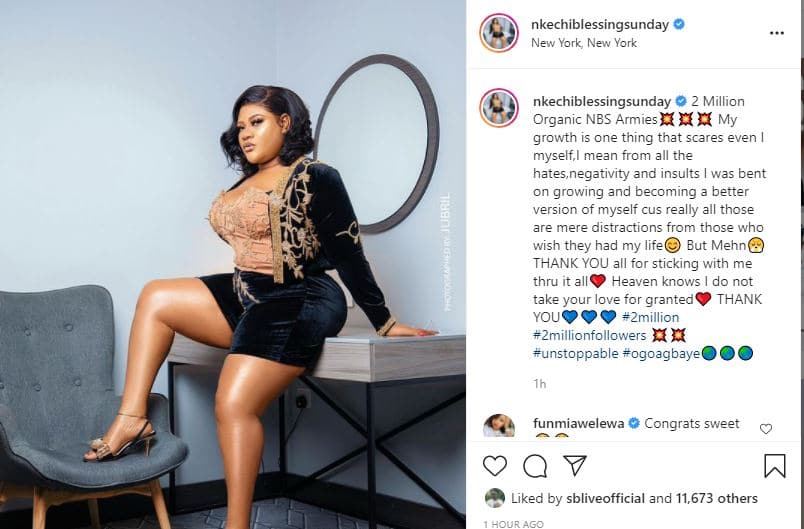 “I would rather leave Nigeria than allow Nkechi Blessing kiss me on any movie set”-Actor, Uche Maduagwu