Is this not broad daylight witchcraft? Actress Nkechi Blessing blasts fan who reported BBNaija Nina to her | Naijabulletin
BREAKING
Published on: December 4, 2021

Nollywood actress Nkechi Blessing has slammed a fan for attempting to instigate a fight between her and former Big Brother Naija Housemate Nina Ivy.

A fan identified as Emeka Charity had sent a DM to Nkechi Blessing telling her that the reality TV star has unfollowed her on the photo and video sharing app, Instagram.

Responding, Nkechi Blessing blasted the fan stating some fans are the problems of Nigerian celebrities as they often create problems when there is none.

Nkechi Blessing added that some fans are always in the habit of reporting celebrities captions and Instagram stories to each other, and some gullible ones will start a fight with their colleague.

Sharing a screenshot of the chat, she wrote: Na dem go DM you tell you to say one person caption or Insta story is about you, some gullible celebrity go begin to pick fight with person wey no offend them. Is this not broad daylight witchcraft?

Naijabulletin News recalled that a few days ago, Nkechi Blessing reacted to the viral video of BBNaija Nina in a wheelchair after her cosmetic surgery.

According to Nkechi Blessing, she is thankful to God for giving her a natural bum.

In her words: Let me just take a moment and say, Lord, I thank you. 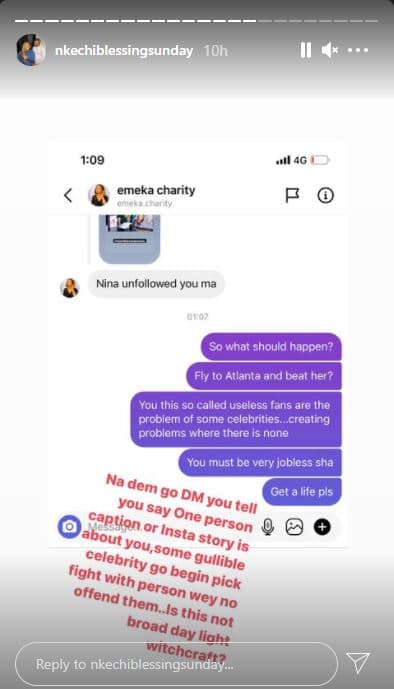 ‘It seems rushed, but I’m happy about it’ Nkechi Blessing set to wed her politican boyfriend

Months after her loggerhead with Jide Kosoko, Actress Nkechi Blessing gets special recognition

“I would rather leave Nigeria than allow Nkechi Blessing kiss me on any movie set”-Actor, Uche Maduagwu