Nollywood actress Nkechi Blessing has shared a braless photo of herself as she continues to defend BBNaija’s Angel, who has been shamed for the shape of her breasts.

News earlier reported that Nkechi Blessing slammed those body-shaming Angel over her saggy boobs stating that no woman deserves to be body-shamed because it can lead to depression.

Still defending the Big Brother Naija Housemate, Nkechi Blessing, took to her Instagram page to share a braless photo of herself.

The actress advised ladies who falls under the category to rock their breast in peace as long as their partner is enjoying it and not complaining.

She wrote: As long as Your partner is Enjoying it and not complaining, Aunty rock your breast in peace You get the point now?

Reacting to the photo, an Instagram troll who seemed displeased with the image said she hoped that her politician boyfriend would not leave her.

Responding, Nkechi Blessing blasted the troll stating that a broken relationship gives witches and wizards like the troll joy, however, God is more than them.

READ ALSO:  “Come Get That Money” – Ginimbi’s Sister, Niela Shares Her Last Chat With Him Before He Died In Fatal Accident

westkumb wrote: I hope the partner didn’t leave you

nkechiblessingsunday wrote: @westkumb That is the only thing that gives witches/Wizards like you joy**Broken relationship..My own God pass una. Foolish fool! 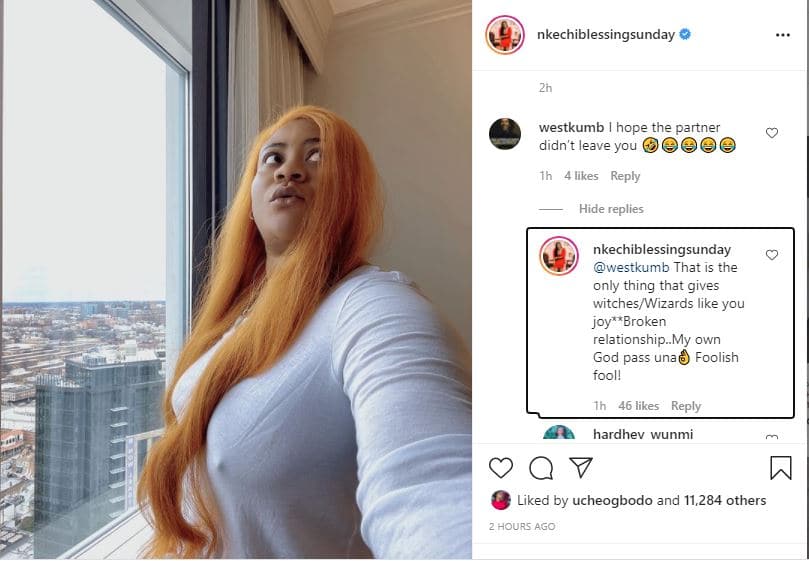