‘Not even N10 Trillion can make me kill Davido’ Isreal DMW | Naijabulletin
BREAKING
Published on: October 24, 2021

Isreal DMW, the personal logistics manager to Nigerian singer David Adeleke popularly called Davido, has revealed that he cannot use money in exchange for the love he has for his boss.

Isreal DMW stated this as he takes time out of his busy schedule to answer some questions about his life and his boss, Davido.

A fan had questioned him if he can kill Davido in exchange for thirty billion Naira.

Responding to this, Isreal DMW said that not even ten trillions could make him kill his boss, Davido.

Fan asked: Can you kill David for 30billion

Isreal replied: Not even 10 trillion

Naijabulletin News recalls that Isreal recently took to social media to react after being mocked over his inability to buy a car following a video of him using a motorcycle (Okada) surface online.

Reacting to the video, which has become a growing sensation on social media, Isreal, in a post shared on his Instagram story, vowed never to steal to impress anyone.

According to Isreal DMW, he will get himself a car when the money comes. 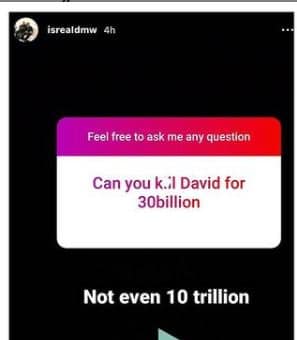 Not even N10 Trillion can make me kill Davido’ Isreal DMW..

Singer Davido misses his late friend, Obama DMW as he jets out to meet DJ Khaled