BREAKING
Published on: June 15, 2021
President Buhari has described the January 23rd controversial letter former president Olusegun Obasanjo wrote to him asking him not to seek re-election as abusive. 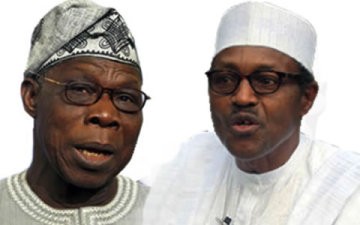 Speaking in an interview with the Hausa version of the Voice of America in the US, President Buhari said even though the letter was abusive, he had to refrain the Minister of Information, Lai Mohammed, from replying the letter with abusive words.
”Even when the Minister of Information and Culture wanted to reply that abusive letter written by former President Olusegun Obasanjo, I told him not to. I later allowed him but only to highlight the achievements of our administration.’’ President Buhari said
In his explosive letter which generated a lot of reactiosn, Obasanjo accused President Buhari of nepotism, having a poor understanding of politics and engaging in blame games rather than accepting responsibility for his failure. Part of the letter read
“Whatever may be the state of President Buhari’s health today, he should neither overpush his luck nor over-tax the patience and tolerance of Nigerians for him, no matter what his self-serving, so-called advisers, who would claim that they love him more than God loves him and that without him, there would be no Nigeria say. President Buhari needs a dignified and honourable dismount from the horse. He needs to have time to reflect, refurbish physically and recoup and after appropriate rest, once again, join the stock of Nigerian leaders, whose experience, influence, wisdom and outreach can be deployed in the sideline for the good of the country”.
SHARE WITH FRIENDS

Are you a REAL MAN?? Read all you need to know about been a real man.