‘Omashola needs prayers’ Manager speaks on the viral video of him wearing rags in the middle of a street
BREAKING
Published on: December 2, 2021

A close source to former Big Brother Naija Housemate Omoshola has made clarification on the viral video of the reality star wearing rags in the middle of the street.

News recalls Omashola sparked reactions after a video of him looking like a mad man in the middle of the street surface online.

This comes a few days after Omoshola, in a post shared on his Instagram page, cried out to fans that he is lonely and depressed.

Big Brother Naija ‘PepperDem’ Housemate, who seemed to be having a tough time, revealed his present condition while sharing a photo of a paper soaked in tears.

Omashola said he is lonely even in the world surrounded by people, stating that he has been faced with so much pressure from his mates even though he had always believed in himself to make things work.

Omashola stated he is slowly getting to his breakpoint even though he is trying to keep calm and feel unbothered about it.

However, a video of him looking unkempt surfaced online on Wednesday evening, 27th October 2021, which generated several reactions and worries among his colleagues and fans on social media.

Ike Oyema, who shared the video, said he was worried about Omashola after seeing his last post about being depressed.

Ike Oyema added that he hopes the recent video of Omashola is a skit adding that he has been away from social media since his last post.

In a new development, a closed source to the manager of the reality star in a private chat with an Instagram said Omashola is down and needs earnest prayers.

The source also disclosed that the video that recently made the rounds on social media is an old skit, and Omoshola’s colleague who shared the video did not confirm its authenticity before sharing it.

See the social media chat below: 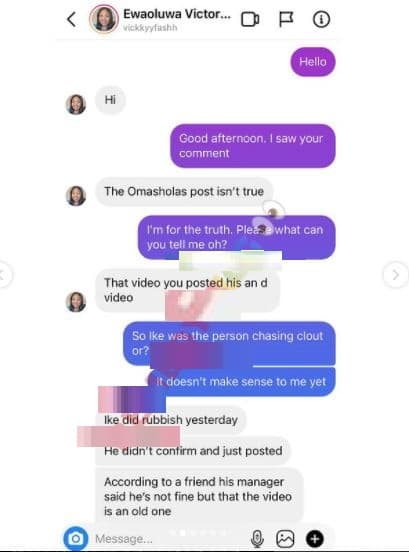 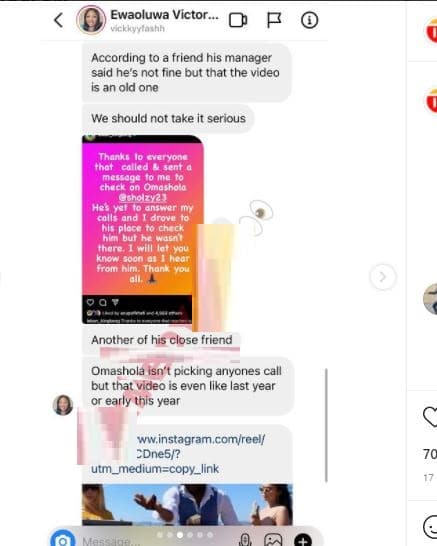 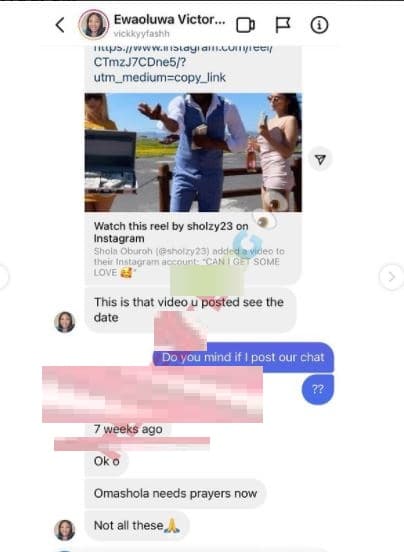