It has been alleged that the Ooni of Ife, Adeyeye Ogunwusi has secretly welcomed a new baby with another woman, leaving his Queen, Prophetess Silekunola Naomi hurt.

This is coming barely a few months after Prophetess Naomi Silekunola, the Ooni of Ife’s wife, Oba Adeyeye Ogwunsi, on 15th April, turned a year older, and a dinner party was held in her honour at the palace.

In a video that emerged online captured the moment the queen was eulogizing her husband and jokingly prayed for the monarch to have more queens while she was giving her vote of thanks.

According to popular Instagram blog, Gist Lover, the Ooni of Ife has other women living in the place with him asides the Queen and the baby was birth by one of them.

The blog claims thus below:

“According to our source, the Ooni of Ife has 3wives in the palace and they want to keep it off social media as Naomi is the only one allowed to use social media as the Queen of Ooni, all other wives were warned severally to meshionu (keep shut). Queen Naomi has not been finding it easy either as she battles several side chics of the King from all angle…All of us at GLB celebrates with the Ooni of Ife on the arrival of his new born. I come in peace.” 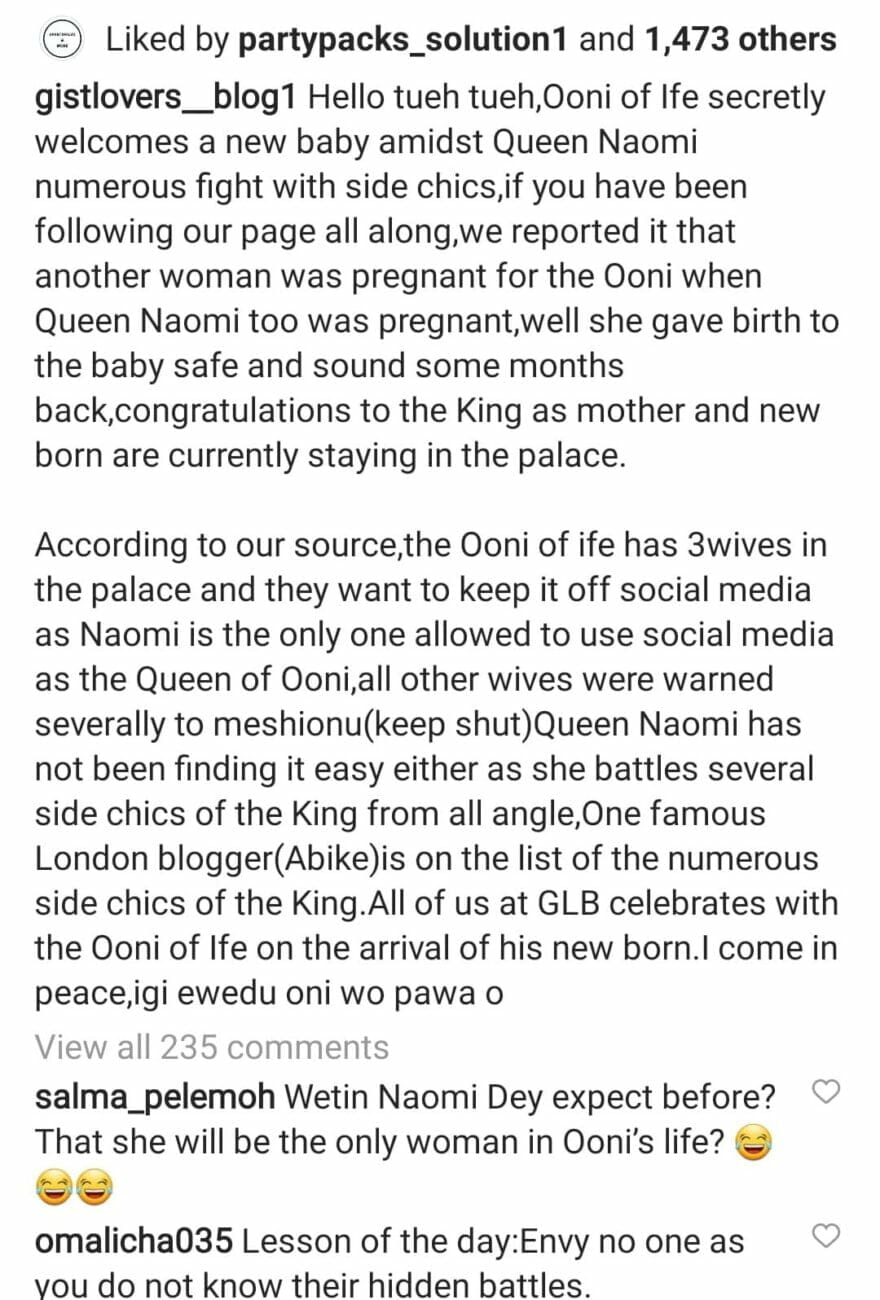 Ooni of Ife reportedly welcomes secret baby with another woman after wife prayed for more Queens..

Meanwhile, a few days ago, Queen Silekunola Naomi shared a photo of herself and the Ooni with the caption “Adorable isn’t it? My fine wine.. congratulations on the grand unveiling of Ife Grand Resorts.”

Naijabulletin News recalls that Prophetess Silekunola Naomi Ogunwusi, who welcomed a baby boy with the monarch, in November 2020, two years after marriage, recently recounted how the societal pressure made the journey to motherhood difficult for her.

READ ALSO:  Man shares sad story of how his classmate’s entire family died on their way back from their grandpa’s burial

Naomi spoke of the “difficult” experience she had prior to conception during her recent feature on TVC’s ‘Your View’.

Making reference to her story, the queen said conception becomes tougher for women when they are constantly reminded of their fertility struggles.

“It was like I was supposed to start popping babies almost immediately. The whole world was just looking at me,” Naomi said.

“Thank God for a supportive husband, he would always tell me not to bother. think it was something I was challenged with from the first day I got married.

Ooni of Ife reportedly welcomes secret baby with another woman after wife prayed for more Queens..