Prophet Temitope Joshua, better known as T. B Joshua has been buried amid tears from his teeming followers and public figures.

The burial took place at the Synagogue Church of All Nations (SCOAN) in Lagos after an interment service attended by dignitaries including Governor Rotimi Akeredolu of Ondo State.

Others included Governor Babajide Sanwo-Olu of Lagos State who was represented by the state’s Commissioner for Home Affairs, and the wife of Ooni of Ife, Olori Naomi Adeyeye.

Friday’s burial was the culmination of a week-long funeral rites that attracted hoards of people across the globe.

The charismatic preacher’s body arrived at the SCOAN premises in the Ikotun-Egbe area of Lagos on Thursday.

While paying tribute to the Ondo-born televangelist who rose to prominence in the 1990s, Akeredolu described TB Joshua’s death as a loss to humanity.

READ ALSO:  What I ordered vs What I got: Customer left disappointed after ordering outfit similar to that worn by CeeC

He said the preacher who attracted thousands of worshippers to his mega-church was a special breed, admitting that the mammoth crowd that attended his burial eclipsed what was recorded during the funeral of South Africa’s foremost freedom fighter, Nelson Mandela.

“I’m not too sure we’ve had the world so congregated in this number from different countries in many such services, maybe, that of Nelson Mandela but the world is more represented here than when Nelson Mandela was buried,” Akeredolu said of the cleric who was credited with predicting some global events. “Indeed, it was and is being globally acknowledged today by all of us.”

The Christian Association of Nigeria (CAN), the “umbrella organisation containing numerous Christian denominations,” which previously had a frosty relationship with the late clergyman, sent a delegation to the burial.

But many mega-pastors in Africa’s most populous nation shunned the ceremony, signaling their cold relationship with T.B Joshua.

Outside the SCOAN premises, many flags belonging to different nations were flown at half-mast.

The mourners came from the Caribbean and South Africa, among others, a reflection of T.B Joshua’s followership which stretched beyond the Nigerian borders.

Hundreds of residents in the Ikotun area lined the streets on Thursday to catch of glimpse of the late cleric’s hearse.

Although many of them are not members of his church, they admitted to have been impacted by the preacher’s charitable works and the industry created by SCOAN. 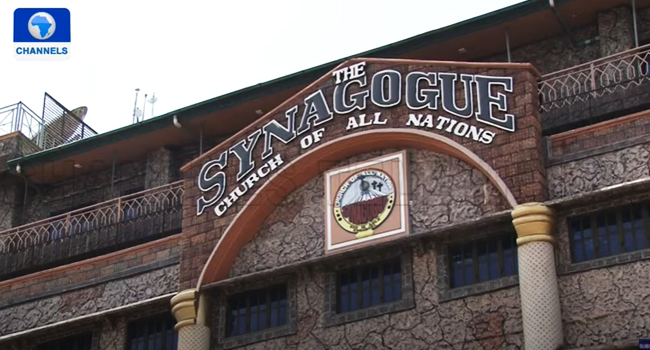 T.B Joshua died on June 5th in Lagos after holding a church service. The cause of his death is unknown. He was 57.