It seems the controversies surrounding Nollywood actress, Tonto Dikeh’s drama are taking another twist and it is never-ending soon as her arrested ex-boyfriend has just been released from police custody.

This comes hours after the police authorities had given reasons for arresting Prince Kpokpogri, stating that they arrested him to enable him to regain his sanity and stop him from becoming more aggressive to the whole situation after which he will be questioned on the issue of ownership of the Lexus jeep.

Taking to his Instagram page, Prince had revealed to all interested social media users that he has been freed from captivity as he made a live video to wish all his Muslim friends a happy Maulid Nabiyy.

His heartfelt wish has caused an outburst among Nigerians after he wished his Muslim friends ‘happy sallah’ as they attacked him by saying he is yet to regain his sanity even after the police authorities had promised to. Meanwhile, some had revealed that there will be more to the Tonto-Kpokpo saga.

@kuvowhites wrote: Has he regain his sanity now? 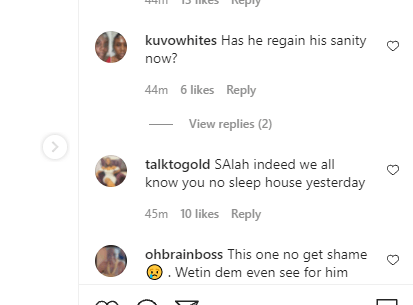 I Never Promised Tonto Dikeh Marriage, She Forced The Relationship On Me- Prince Kpokpogri Explains