Veteran Nollywood actress Rita Edochie broke down in tears during her visit to the Synagogue Church Of All Nation to pay tribute to late prophet TB Joshua.

Naijabulletin News recalls that the popular prophet reportedly died on Sunday, 7th of June, and since then, Nigerian celebrities, politicians and citizens have mourned the 57-year-old man of God.

Taking to her Instagram page to share a video of her visit Rita Edochie said she was still in denial of the cleric’s death until she got to the church.

The actress said, irrespective of the death of T.B Joshua, and she is thankful that he left a legacy for any wise person to emulate.

She wrote: DADDY TB, I NEVER BELIEVED. TILL I GOT TO THE CHURCH. BUT THE GOOD THING IS, YOU LEFT FOREVER LEGACY FOR ANY ONE THAT IS WISE TO EMULATE.
JESUS CHRIST WAS NEVER BELIEVED WHEN HE CAME, SAME THING WITH ALL THE PROPHETS IN THE BIBLE AND IT IS STILL SAME TILL TODAY AND THAT IS THE REASON SOMEONE COULD OPEN HIS OR HER MOUTH AND SAY CRAZY THINGS ABOUT BUT IT DOESN’T MATTER. WHAT MATTERS IS THAT YOU HAVE FINISHED YOUR RACE.
REST ON DADDY TB TILL WE MEET AGAIN. 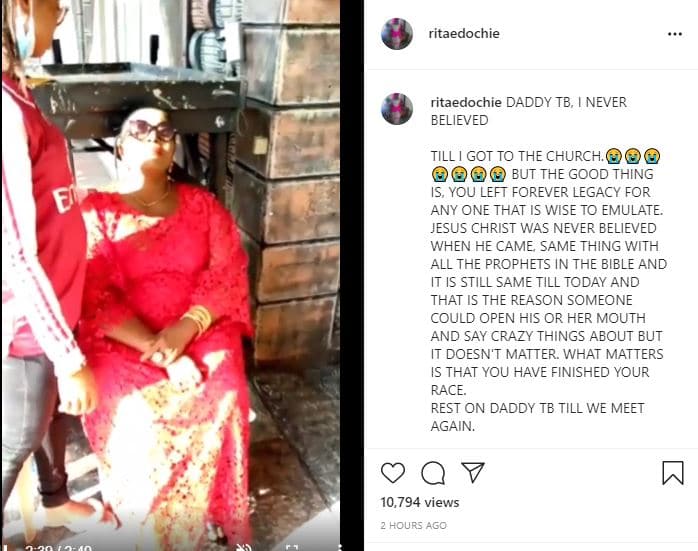