Many forces are fighting me’, Sandra Iheuwa new husband Steve Thompson cries out

Steve Thompson, the new husband to Ubi Franklin’s babymama Sandra Iheuwa, has cried out about fighting forces in the dream.

Popular Lagos socialite Pretty Mike disclosed this while explaining why he stormed the couple’s wedding reception with a herbalist.

News had earlier reported that Pretty Mike sparked outrage on social media after he stormed the wedding reception of Sandra Iheuwa and her husband with a chief priest.

Many social media users had slammed Pretty Mike for seeking unnecessary attention, while others laughed over the issue.

Giving reasons for his action, Pretty Mike, in a post shared on his Instagram page, said Steve Thompson had told him that many forces are fighting him in his dream against the wedding.

READ ALSO:  Pastor Adeboye narrates how God helped him and his poor uncle feed in 1956

He added that Steve Thompson also requested help and he came prepared with the herbalist.

He wrote: My brother Steve told me there are many forces fighting him in his dream against this wedding, he asked me to support him and I came prepared. 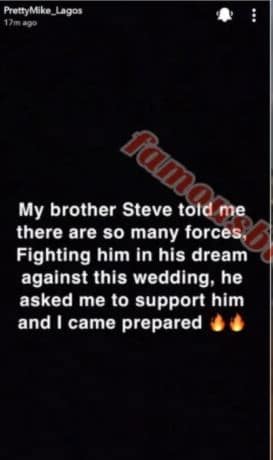 Many forces are fighting me’, Sandra Iheuwa new husband Steve Thompson cries out.