Nigerian legendary singer 2face Idibia has reacted after he had a real-life experience of popular slang ‘Cut soap for me’.

‘Cut soap for me’ is a trending slang in Nigeria which literally means teach me how you succeed or an alternative way of asking someone to show you the way to success.

The slang became a reality for 2face in a hotel in Benue State after the management of the hotel cuts a bar of soap into two for lodgers.

Sharing this on his Instagram story, 2face noted that only in Nigeria can such a thing happen.

He wrote: Not my ugboklo. When you get to a hotel in a rural area and experience a real-life situation of ‘Cut soap for me’ only in Nigeria. And test they actually cut the soap.

The post, which generated hilarious reactions from netizens, urged 2face to live with the situation as times are currently hard in Nigeria.

yettyqueen1 wrote: Una dey cut for whole 2baba??? If me come lodge for the hotel Na pinch of salt Una go drop for me to bath?

unkul_obi wrote: Abeg who go cut soap for me? Times are hard

__amygeorge wrote: Atleast they cut soap for u without you asking

This comes after a troll accused Pero Adeniyi of being a homewrecker, and this is obviously connected to the call out of Annie Idibia a few months ago.

The Instagram troll informed 2face’s son to advise his mother, Pero Adeniyi, to stop being a homewrecker, and some people accused Annie of using the fake page to troll the boy.

Reacting to this, 2face defended his wife Annie, stating that God will punish everyone accusing his wife wrongly and further celebrated her describing her as a queen. 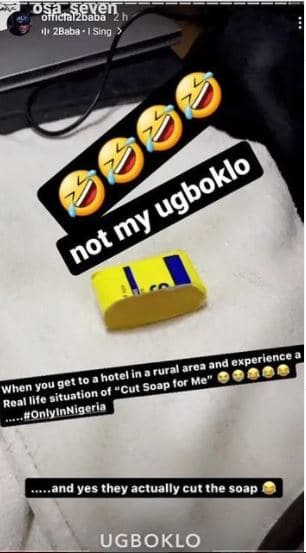