The outside crooner took to his social media pages on Tuesday, November 2, 2021 to show of his latest acquisition. 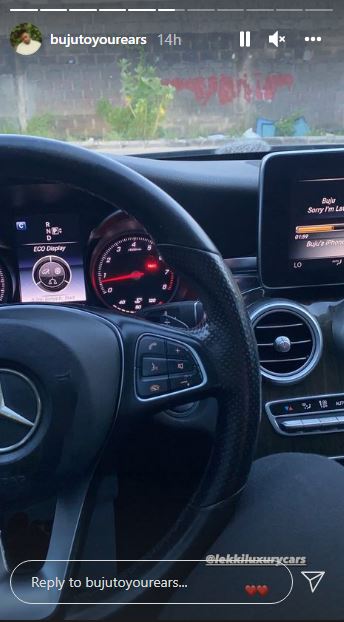 Excited about his latest accomplishment, Buju shared videos and pictures of the interior and body of the car while gushing over it.

“First whip and this ain’t no meme shit”, he captioned the post.

In other news, Buju was recently spotted in the studio with legendary singer, Wizkid days after his old tweets trolling Wizkid and other top singers resurfaced.

Recall that Nigerians dug up his old tweets slamming top Nigerian singers and tagging their songs trash before he came into limelight.

In one tweet, he says “if everyone had his mentality, some musicians will not make it.” In another tweet, he called Davido a “childish c**t“. He called Mr Eazi overrated and outed Yemi Alade as well, he also tagged Grammy award winner, Wizkid trash.

Reacting to the old tweets that resurfaced Nigerians dragged the outside crooner to filth, although he immediately deleted the tweets and then made a statement in reaction, saying at the time, he was ignorant.

A few days after the social media outrage, Buju was seen with Wizkid, Wande Coal and Ghanaian singer King Promise in the studio. Watch video here.