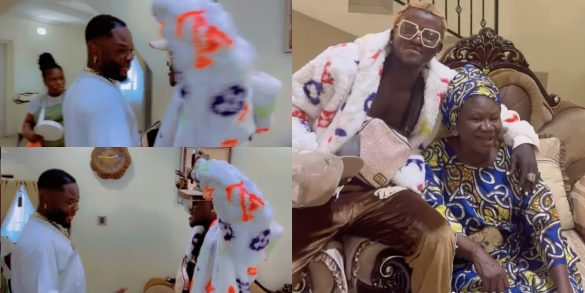 Yoruba movie industry seems to have welcome Singer Portable as he was spotted with with Itele D Icon, Joke Muyiwa, Sanyeri, and others on a movie location.

In a video shared on social media by actor Ibrahim Yekini, better known as Itele D Icon, Portable could be seen with Itele at different locations as he hailed the actors.

Sharing the video, he wrote:

Portable also took to his Instagram page and wrote:

#SIKASIKATHEMOVIE …….An evil heart possessed an evil thinking that generate into an act of wickedness. Whatever evil the mind thinks and the mouth projects is all a breed of wickedness that comes directly from the heart. What we do to others determines our fate of what we get in return. Watch out for this fantastic movie

NB earlier reported that Portable crashed his newly acquired Range Rover SUV while on his way to a yet to be disclosed location yesterday. The alleged ‘high’ singer drove the car into a building.

A few hours later, he took to Instagram to appreciate God for surviving the crash and alerting his fans on the good condition of his car.

Following this development, Portable accused his haters of trying to kill him by using charms to touch his Ranch Rover car. The singer alleged that his royal car was touched by haters who were jealous of his possessions. He, however, claimed that he would soon have a new car after the crash.

It is no doubt that Portable is no longer in the good graces of Nigerians as they took to Instagram to drag him over his outbursts. Netizens expressed their displeasure over his recent actions, calling the right authorities to take him to order.

News recalls that Portable was denied the Canadian Visa after reportedly being removed from performing at an event in the country.

According to reports, Portable was removed from the event over his continuous outburst on social me…CONTINUE READING…