Popular singer, Divine Ikubor aka Rema, has taken some big money moves as he buys a VVS diamond chain worth a whooping $40,000 (N15 million).

The Mavin signee, who is currently in Hollywood, California, took to his Instagram stories to flaunt the expensive jewelry.

The singer also threw a subtle shade at his colleagues that have been showing off their jeweller as he also revealed the identity of his jeweler.

He wrote, “Y’all have been showing off your jeweler. Here’s mine @johnnydangandco” 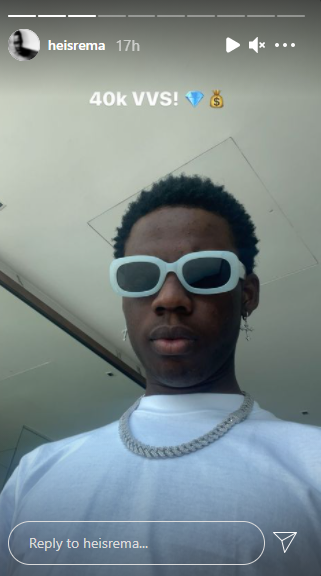 Watch the videos he shared below,

In other news, Rema recently revealed that he is inspired by Davido’s record breaking feat on YouTube.

The music video which was directed by DAPS and was released on the video sharing platform in June of 2017, was the first Afrobeats video to cross a 100m, 150m and now 200m views on YouTube. The 28-year-old singer disclosed that he made the hit song as a joke and fortunately, the visuals has achieved a huge milestone.

Reacting to the news, Mavin signee, Rema took to Twitter to laud Davido for the feat.

“I celebrate with Obo, this has never been done, a huge milestone, and I’m inspired.”

Davido thanks Rema for celebrating his historic YouTube milestone…

Top 5 Most Anticipated Nigerian Albums In 2021