‘Sometimes I even feel like giving up’ Actress Funke Akindele | Naijabulletin
BREAKING
Published on: October 27, 2021

Nollywood actress and content creator Funke Akindele has reassured herself that she will never give irrespective of the feeling of defeat at some point in her life.

In a post shared on her Instagram story, the actress made a sarcastic statement wishing to stop working and have money to be spending.

Funke Akindele said that the hustle for a living and making money is accurate, and an individual needs to go for it. However, she added that she must never give up, even when she feels like it.

READ ALSO:  Funke Akindele will not throw back stones at you – Eniola Badmus to Iyabo Ojo, Toyin Abraham

I wish I can stop working and just have money to be spending. The hustle is real, you just have to go for it. I must not give up even when I feel like.

Naijabulletin News recalls that Funke Akindele recently revealed how she was domestically abused and blackmailed by her ex-husband, Kehinde Oloyede Almaroof.

A post shared by Instagram blogger Cutie_Julls alleged the actress recounted all her ordeal in a scene of her self produced popular comedy series, Jeniffer’s Diary, aired on scene One TV dated, 18/07/2021

The actress disclosed how her former husband verbally abused her and threatened to go public if she ever walks out of the marriage, an attempt to smear her reputation and brand.

According to the actress, her former husband ended their marriage via phone call while she was on a movie set.

This affected her both mentally and physically, which resulted in the loss of several endorsement deals. 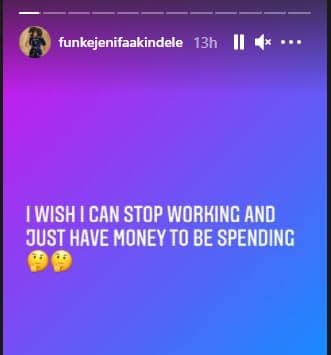 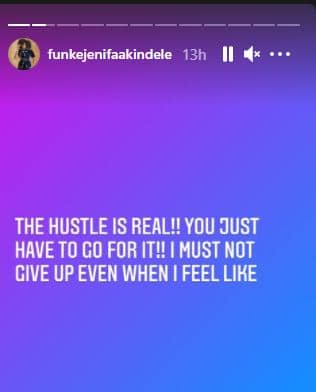 Sometimes I even feel like giving up’ Actress Funke Akindele…

VIDEO: The devil will not have a place in our home – Funke Akindele showers prayer on her husband