News recalls that the actress, in a post shared on her Instagram page, said her 8-year-old daughter had been a constant victim of bullying by a teacher, who made her terrified to go to her new school. The bully happened not to be her class teacher but usually show up at her class every day to intimidate her and tell her she does not like her mom.

However, a lady allegedly narrated what really transpired in school adding that, Mercy Johnson’s daughter was sent out of her previous school due to the actress’ dementia attitude and the fact that she did not give her children good training.

According to Sonia Ogiri, she pinpointed that her colleague now knows how it feels to be hated and to display hatred for someone after Mercy Johnson had declared that the bully boldly showed the hatred she had for her a week before the incident.

In a shared post, she said Mercy had hated her for no reason and even shoved the fact that she hated her to her face as she revisited her post about Mercy Johson on the 2nd of September, 2019.

Sonia said people had misjudged and called her a jealous person despite how it almost destroyed her life after calling Mercy out, stating that a snake will always be a snake.

Speaking further, she said the narrative has changed as God has opened everyone’s eyes to see the truth.

How the Narrative has changed. I went home and told my husband, this person doesn’t like me 🤣🤣. May GOD open our eyes to see the truth. Judgment day coming on all of us one by one. GOD will always be GOD. Don’t do to others what you don’t want them to do to you.Peace ✌️ out 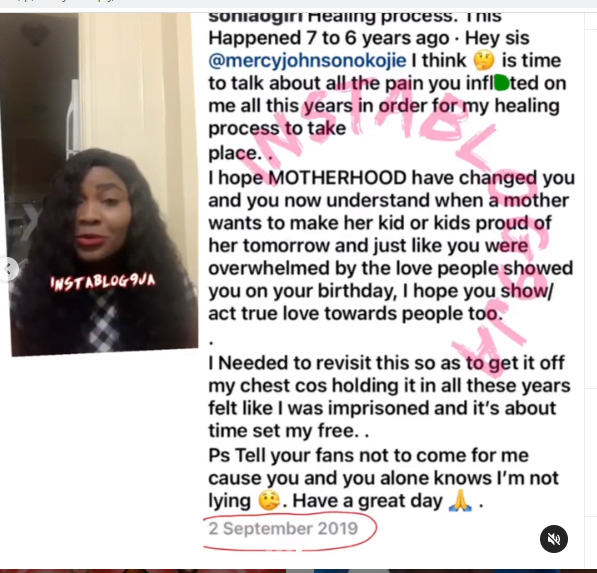