Baba Dee, brother to the late Legendary singer Olarenwaju Abdul Ganiu Fasasi, better known as Sound Sultan has shown his displeasure towards friends of the late singer who refused to attend his memorial event or call, Farida the wife of the deceased passing through a tough time after losing her husband.

News reported that the wife of the deceased recently penned a lengthy tribute accompanied by several throwback photos in memory of her husband and some Nigerian celebrities like Iyabo Ojo, JJC Skillz, Bovi sent consolatory messages to her.

According to him, none of his friends could attend his virtual memorial event on a sit at home Saturday organized by family, rather they were living life as if nothing really happened by posting pictures and videos of him on social media.

Speaking further, Baba Dee vows that their death will also be used to generate social media content just like what they did to his brother.

READ ALSO:  Socialite Ginimbi bought his own casket one week before he died

Fake Friends ….Not a call to his wife, didn’t bother to attend his memorial event on a sit at home Saturday … Posting picture and video on social media , your death shall also be used to generate social media content. 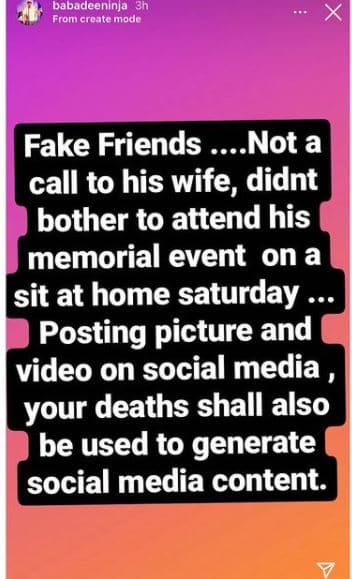