Contrary to Dowen College’s claim that Sylvester Oromoni died from football sustained injuries, the father of the late 12-year- has spoken out and alleged that his son’s assailants beat him up for refusing to join their cult.

Oromoni’s nephew Perry had taken to Twitter to share his account of what transpired at the school located in Lekki, Lagos. He said the deceased was attacked for vehemently declining to join what he termed the secondary school’s “cult group” dominated by older boys.

Five boys were alleged to have been involved in the incident. But the school debunked the claims.

The school said one of its hostel officials had informed the management on November 21 that Junior was injured while playing football with his colleagues.

“Preliminary investigation showed that there was no fighting, bullying, or any form of attack on the boy. He made no such reports, neither to his sister who is also a student, nor any other students, prefects, house parents, medical staff, or any of the management staff. The school has 2 regular nurses and a qualified medical doctor that promptly attends to students. [We] will not tolerate any acts of cultism which is why there is nothing like that,” the school had said.

Oromoni, however, told TheCable that the school’s story about the incident was false. He said the bullies had asked his son to describe his sister’s privates. 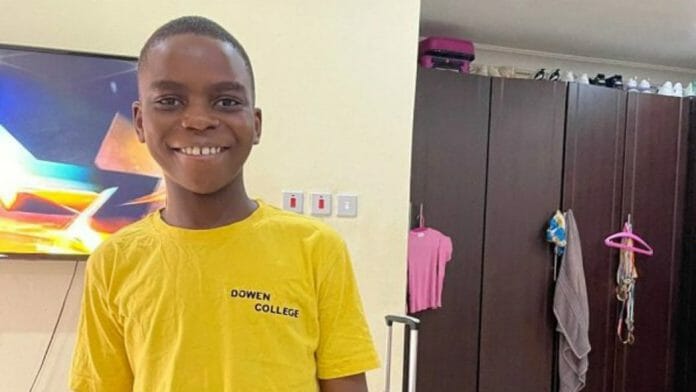 “They put fear in him so much so that, when you ask him, he might keep to himself and say, ‘they will kill me’. This way, we didn’t know what to do,” he said.

Oromoni said his late son would have turned 13 on December 4, adding that he would still bake a cake in honour of Junior.

Oromoni’s family said Dowen had temporarily suspended the boys involved after the family’s eldest son took it up. He said Junior was also switched to a new hostel but the bullying and intimidation persisted into the new term.

The father added it was on November 29 when he was away for a government function that Junior “opened up” after he was flown to Warri, Delta State for treatment.

“Junior said, ‘mummy, I didn’t play ball; I didn’t fall.’ He jumped off his hostel bed. They kicked him, matched his waist. Other students ran off. They threatened to kill them all if they spoke a word to the school staff. They warned Junior to say he sustained injuries while playing ball. They threatened him. If you ask the roommate, they’d all lie. They matched his ribs and waist. All that pain for a 12-year-old,” he said.

Oromoni added that his son suffered liver enlargement due to congealed blood. He also questioned the school’s decision to allow the boys involved to be withdrawn by their parents without the knowledge of the police.

It was gathered that the family petitioned the Lagos commissioner of police Hakeem Odumosu on December 2 and is planning to also write the inspector-general of police (IGP) on December 6 for a full-scale probe.

An autopsy is being awaited to know the cause of Junior’s death.