Naijabulletin News recalls the movie, which aired on YouTube on July 4, 2021, featured characters with names of persons involved in the rape case, including actors Iyabo Ojo and Olarenwaju Omiyinka, also known as Baba Ijesha.

The movie sparked outrage on social media as many Nigerians called the TAMPAN association to discipline Yomi Fabiyi over the movie production.

In a new development, the association, in a statement, said Yomi Fabiyi had been suspended indefinitely for gross professional misconduct and unethical practices.

Part of the statement reads:

Having listened to the detailed defence of Mr Yomi Fabiyi, who is the Producer/Director of the controversial film ‘Oko Iyabo’ and his Co-Director, Mr Dele Matti, the Ethic, Conflict and Resolution Committee hereby found them guilty of professional misconduct and unethical practices.

“Although Mr Yomi Fabiyi insisted that it is his fundamental human right to use his creative talent to produce films that will tell his own account of the trending issue but his Co-Director admitted his fault and regretted his involvement in the film.”

TAMPAN pointed out that except “the work of art is a ‘Cinema Verite’, no one is allowed to use a real name(s) of another person (s) in a feature film. Therefore, it is professional misconduct to use a real name(s), stories and factual events of the person(s) without their consent not to talk of a plot that is denigrating to that person.

READ ALSO:  Wizkid Finally Flies Back To Nigeria After A Long Stay In The UK (Video)

“That the story, plot, theme, title, dialogue, names and general content of the film ‘Oko Iyabo’ is a factual presentation that may give rise to prejudice since the matter is already in court. 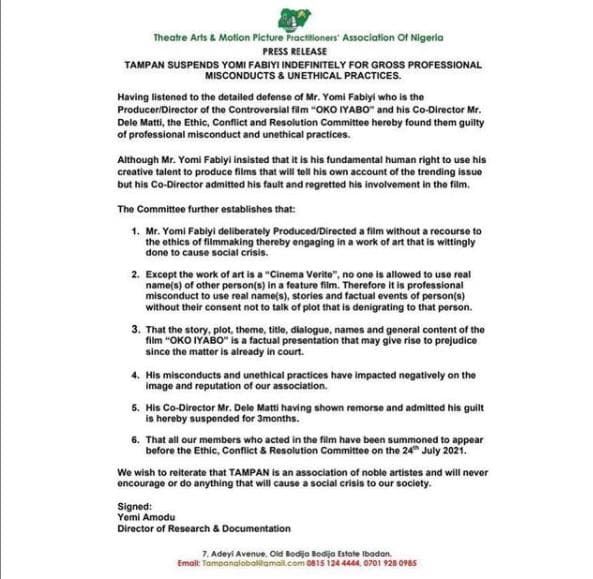