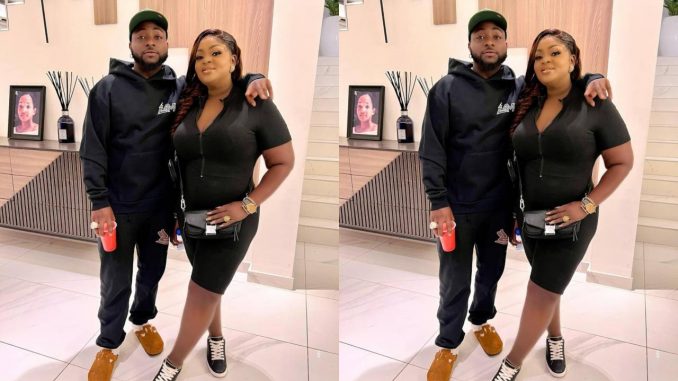 Eniola Badmus took to Instagram to share a photo of herself and Davido, accompanied with a gratified message.

The actress and multi-brand ambassador said she is grateful for Davido’s constant support and wished the singer would continue increasing.

She wrote: Thank you for always supporting me 🩸
@davido OBO no go minus

Eniola Badmus’s message was after congratulatory messages from fans, friends, families and colleagues of Funke Akindele took over the internet, rejoicing her achievement.

However, some queried the actress for supporting her friend, alleging that she refused to post Funke Akindele after her marriage broke up.

A user identified as glitz claimed that it had been long since he saw Funke Akindele’s picture on Eniola Badmus’ page.

Glitzann: Why are you posting her as soon as she left her marriage? It’s been long I saw this face on your post ooo…. Eniola you make me wonder oooo….

Many are still yet to absorb that Eniola Badmus and Funke Akindele are still on good terms despite that they no longer goof around on social media.

Eniola had made a statement regarding their alleged separation, claiming they were still together as before but decided to give each other space.

News also recalls that critics attacked Eniola Badmus for endorsing former Lagos State Governor Asiwaju Bola Tinubu as the next president of Nigeria ahead of the 2023 General Elections.

One Annie wrote “Ur face show, ur Tinubu shine”

One Chizzy responded by saying “Na Tinubu paid for all that surgery. Now we know.. Stomach infrastructure”