“The biggest mistake you can ever make is letting your parents decide who you should marry” – Reality TV star, Ese Eriata | Naijabulletin
BREAKING
Published on: November 27, 2021

Reality TV star, Ese Eriata has opined that the biggest mistake anyone can make in life is to allow their parents choose who they end up with.

According to her, the tradition of parents deciding who their children should marry or setting standards for their children’s spouses is archaic and needs to stop.

In a lengthy post she shared on Snapchat, the Big Brother Naija star stated that most people who succumb to their parent’s decisions often times end up with regrets.

“The biggest mistake u can ever make in your life is letting your parents decide who u should end up with
How parents always think they know it all because they feel they’ve been there; makes me wonder if they realize they are using their clock to set our time.

All they want is the best for you and what will favor the family. But they neglect the part where they have to be sure if what they want for u is what u want for yourself. I hear things like “I’m not into my marriage” and when u ask “why?” You hear things like “my parents wanted it”. Do you know the regret that comes with ending up with someone u don’t want to be with?

Then they Console you with “don’t worry love will come along the line” shey na from arik airline or Emirates airline e go pass come.

It’s 2021! That nonsense has to stop honestly. The most Irritating part is when they are specific on the tribe not to bring home like say e no get tribe way no Dey do evil things. What has tribe got to do with someone’s personality? When will our parents know that tribe doesn’t Determine a good person? Even your very own town person fit still run u street.” 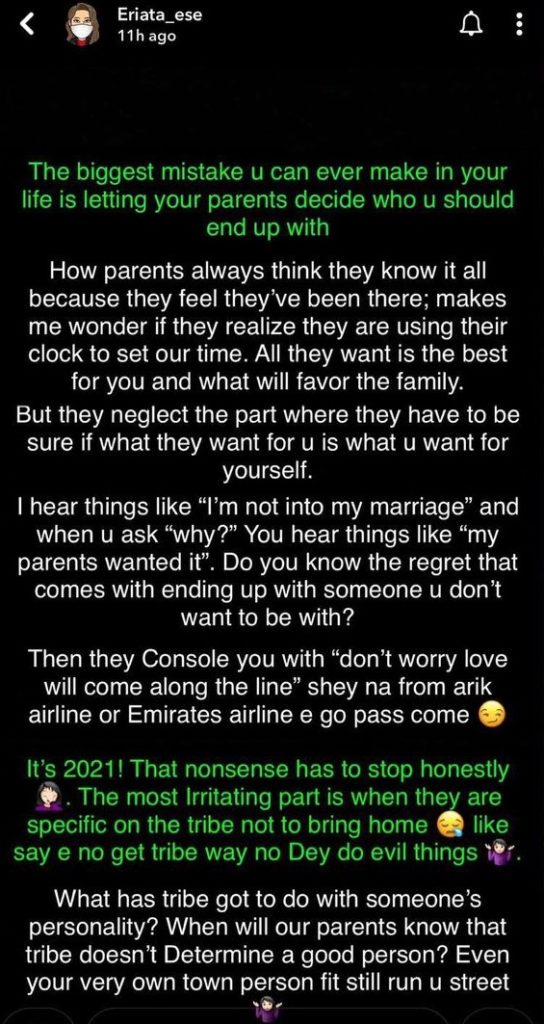 “The biggest mistake you can ever make is letting your parents decide who you should marry” – Reality TV star, Ese Eriata