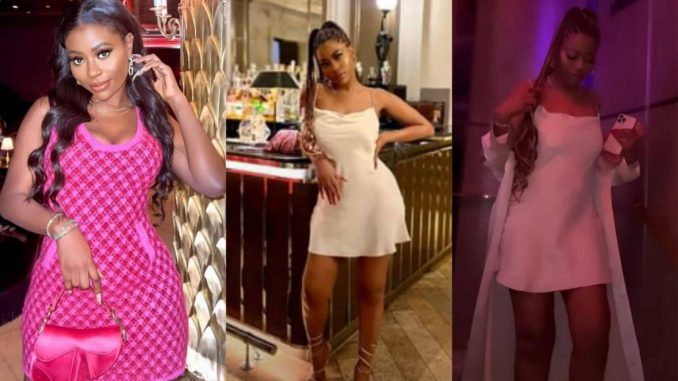 The socialite and fashion entrepreneur had sparked pregnancy rumours as she stepped out in style with a protruding belly.

Sophia Momodu, who is in London, shared a short video of her day’s activities.

Many eagle-eyed fans could spot what seems like a growing bump.

Flooding her comment section, many queried if the mum of one was pregnant.

See some comments below,

tashadonno: It’s the baby bump for me

princediamod: It’s the baby bump for me Awww I’m so emotional

ntuthuko.mdluli: She’s still sexy with her baby bump and she knows how to dress for it

aminataceesay: Is that a baby bump? Am trying to clear my eye Biko slap us Queen

The niece of media entrepreneur Dele Momodu shut down the rumours.

“Who started the rumours, I need to know the person. I am not pregnant.

Can I say something? Can’t I put on weight? So I can’t say I wouldn’t work out for days and get some belly pouch?

Why can’t you say Sophia is getting money and is glowing.

Am so mad, I want to know who started the rumours, I am ready to fight with the person. Na fat I fat I no kill person”.

“I made a decision this year that if something comes up about me that I am not comfortable with, that is completely untrue, I will speak up on it. I am not Beyonce, I can’t do that Beyonce silence.

If I am pregnant I am going to pull a Rihanna on you. You all know my life is public there is nothing to hide. If I am pregnant we will practical raise it together. If I was pregnant you will see it cause I am not scared of nobody my first pregnancy was private, I promise you my next pregnancy would be public, cause I have done the privacy, I want to do the publicly am not scared of you guys, so I need you guys to stop with the pregnancy rumours”.

News recalls Sophia Momodu had sparked engagement rumour with an unknown lover as she rocked the internet with beautiful photos of herself.

The beautiful mother of one shared lovely photos of herself online with a caption that got many talking on her timeline.

She wrote: E sure for me o. Till I hang jerseys o”.

Lovely reactions trailed the photos as many commended her beauty.

However, a user identified as Chinye noted the ring on Sophia Momodu’s middle finger by calling the attention of others to this discovery.

We also recalled that Sophia Momodu fueled dating rumours about her and her baby daddy, Davido. This was after numerous reports emerged online concerning the relationship between the duo.

The rumour was fueled by a video shared online by controversial gossip blog Cutie, which captured Sophia Momodu being guarded by one of Davido’s bodyguards.

Cutie captioned the video with a cryptic word: “Awww … One of Papa Imade’s bodyguard seen ensuring the safety of Mama Imade”.

Numerous reactions that trailed the video fully supported Sophia Momodu’s alleged relationship with Davido, as many believed she deserved Davido’s love and attention.

Some also highlighted that Sophia Momodu spends most of her time in Davido’s mansion and is mainly spotted with the singer’s expensive rides.