Numerous comments have been left on a dancing video featuring Emmanuella Samuel, a well-known young comedian. 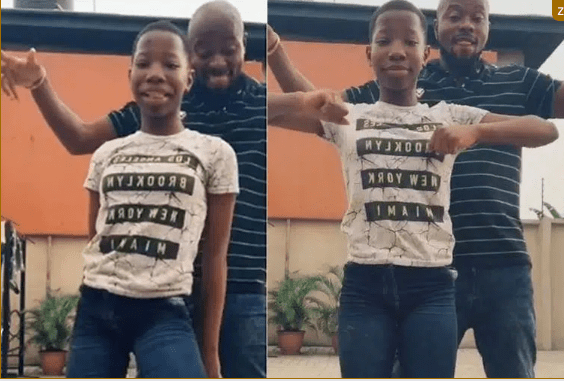 The teenage skit creator and a man could be seen singing and dancing to the song “Love Not War” by the well-known American singer Jason Derulo in the short TikTok footage.

It is of no doubt that Emmanuella demonstrated her exceptional dance abilities. Nonetheless, the music she chose for the video didn’t sit well with viewers, who attacked her online.

Some even advised her to avoid following modern trends.

Reacting, one Raymonf mark wrote:
“Emmanuella, do you realise that God gave you a talent for arts, and you are now using it for the world?”

Memj Creativity wrote:
“At 12 years old, you already know how to whine your waist? Beautiful Emmanuella, but just enjoy your fame, money and childhood in a Godly way.”

Jennifer_ wrote:
“Of all songs, it’s can we just make love. This girl, I no dey understand you again.”

NB reported that the Legendary icon held an elaborate event to celebrate his huge milestone.

The star-studded event had Nollywood stars, monarchs, billionaires and many dignitaries in attendance.

The comic actor was the night’s host, and being his usual self, Lateef kept the guests laughing.

Lateef, who is very good at singing, thrilled the guests with his special rendition.

The actor serenaded the legendary singer with melodious songs.

Emmanuella Ropo, Femi Adebayo, and others took the stage to rain money on him.

News recalls Lateef Adedimeji had a hot exchange with a critic as he defended his wife Mo Bimpe’s mode of dressing.

The ‘Ayinla’ movie star had posted photos of himself and his woman slaying in a white and pink outfit.

The couple who had stepped out for an event over the weekend had delighted fans with lovely photos of their outfit.

A critic who was unimpressed with Mo Bimpe’s dressing took to his comment section to give unsolicited advice.

Infuriated with her comment, Lateef slammed the critic for he…CONTINUE READING…