‘I’m tired of people telling me I have put on weight’ DJ Cuppy laments bitterly » Naijabulletin
BREAKING
Published on: September 17, 2021

Female disc Jockey and billionaire’s daughter Florence Ifeoluwa Otedola popularly known as DJ Cuppy, has cried out about being criticized for putting on weight.

A few weeks ago, DJ Cuppy came under heavy criticism following her summer photos shared online fans faulted the billionaire’s daughter for putting on so much weight.

Cuppy had taken to microblogging platform Twitter to question his fans about the MTV cribs viewing party.

Reacting, a Twitter user made a similar statement about his body size, urging her to cut down a little.

Responding, DJ Cuppy said she’s tired of the statement about her body size, and she’s aware that she has put on weight; however, her health remains her priority.

The female disc jockey referred to her last year statement that summer money is over her summer body.

Austyne wrote: You are adding wight Cuppy…. pls cut down a little.

Cuppy replied: Sick of this shit, Yes I knowwwwwwwwww I have put on weight! My priority- health? Yes. Weight? No. Said it last year and I’ll say it again. Summer money over summer body.

Naijabulletin News recalls that DJ Cuppy recently said she’s one of the happiest in the music industry amid the ups and downs in her career.

In a post shared on her Instagram story, Cuppy said life is too short to be anything short of happy.

The billionaire’s daughter said although she realises some facts about life at age 28. She further advised her fans to live their life fully, have fun, learn, take chances, face forward and do not allow anyone to bring them down. 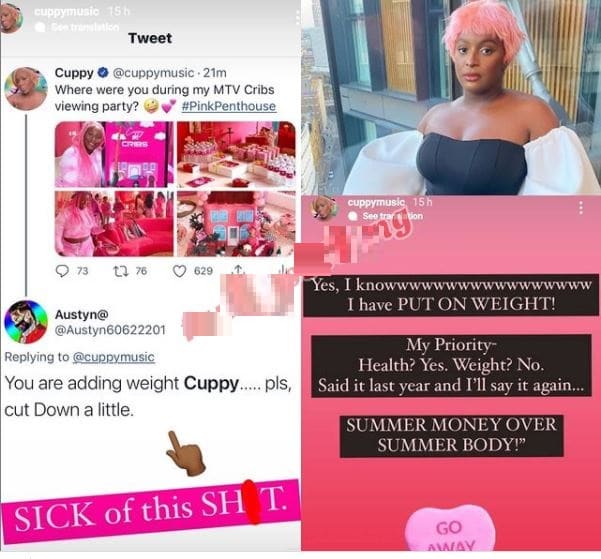 ‘I’m tired of people telling me I have put on weight’ DJ Cuppy laments bitterly..

‘I ‘ve so many COVID-19 type symptoms’, DJ Cuppy cries out

DJ Cuppy reveals two professions she would love to date