Actress, Toyin Abraham has declared her support for her colleague, Nkechi Blessing following her ban from Nollywood.

NB recalls that Nkechi was banned along side Iyabo Ojo over Baba Ijesha’s case.

In a viral video, Mr Latin, Jide Kosoko and a few others were seen warning movie producers not to work with Nkechi and Iyabo because of their suspension from the movie Industry.

Amidst all these brouhaha, Toyin Abraham took to her Instagram page to show Nkechi some love and support.

Sharing a photo of both of them, the mother of one wrote

“My forever girl love @nkechiblessingsunday … Love u so much Nkechi” 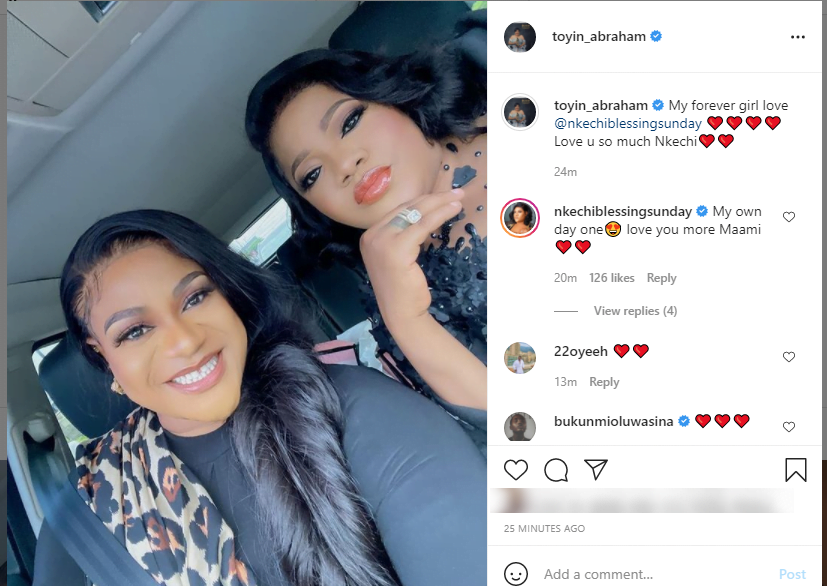 @nkechiblessingsunday wrote “My own day one… love you more Maami”

READ ALSO:  ”Your obsession with 2face will be your death” – 2face’s brother slams Blackface

Naijabulletin earlier reported that Nkechi threatened to discloses all Jide Kosoko does in private, adding that his grownup daughters will be ashamed of him. The curvy actress also went ahead to place huge curses on the people that suspended her from Nollywood.