For sometime now, there have been speculations that actors Funke Akindele and Toyin Abraham are not friends as they always shun each other on social media during birthday, wedding anniversary, premiere and other celebrations, but a new move by Funke Akindele has sort of now confirmed the rivalry.

The talented actresses who have not been on good terms, refusing to attend each other’s movie premier and other functions began their acting career in the Yoruba movie industry and have in recent times, made their mark on the silver screen. They are arguably, no push overs when it comes to interpreting movie scripts to the letters.

Naijabulletin News reports that Toyin Abraham recently released a sequel to her one movies, The Ghost and The Tout which premiered on the night of September 5, 2021 ahead of its official release date slated for September 10, 2021.

For weeks now, Toyin has been promoting the movie on all her social media platforms with many of her colleagues and fans reposting and sharing on their platforms as well; as a matter of fact, Iyabo Ojo released a music video to also help in creating awareness for the release date, September 10.

“It is about to be a movie, the ghost and the tout part two in cinemas from the 10th of September, anticipate” 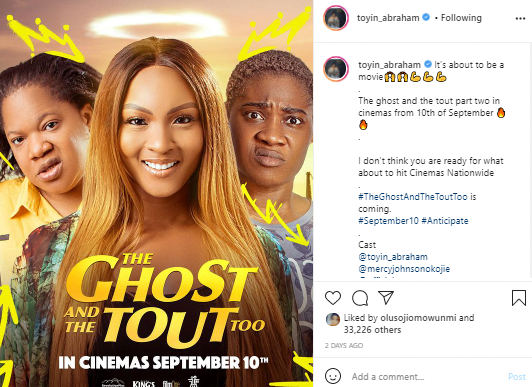 Interestingly, Funke Akindele who has completely shunned Toyin’s movie poster has now also fixed the same date, September 10 for the release of her Omo Ghetto the Saga movie on Netflix. 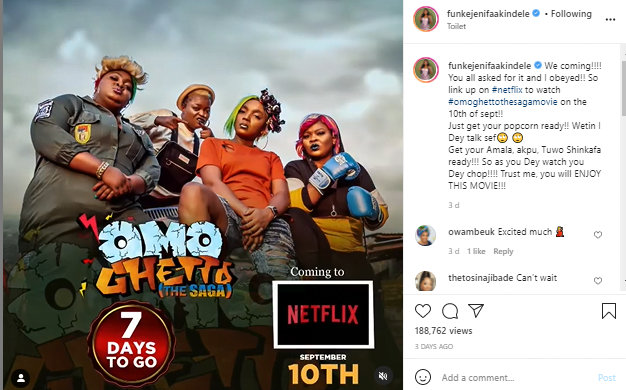 “From the Ghetto to Netflix!!!!! #OmoGhettoTheSaga is coming to @naijaonnetflix this September. Get ready to experience the Saga all over again. #GetReady#September10#OmoGhettoTheSaga” Funke Akindele announced on Instagram.

READ ALSO:  ‘You warms my heart and fills it with pride’ Toyin Abraham’s husband, Kola Ajeyemi, showers encomium on his daughter

An act that has got many wondering if it was done in purpose to spite Toyin Abraham for pitching tent with Iyabo Ojo, whom she is also not friends with and also for taking over her position as the Nigerian Centre for Disease Control (NCDC) ambassador, NDDC ambassador in 2020 after Funke Akindele was sacked over flouting of Federal Government social distancing directives.

Although, Toyin Abraham clarified her position after she replaced Funke Akindele, saying “It has just been brought to my attention that blogs are reporting that I am now NCDC ambassador. Implying that I have been used to replace a colleague. That line of thought necessitate I put this out there. I am not an ambassador to NCDC. I do not like the narrative that I am trying to take advantage of a bad situation. I support the campaign against Covid-19, I appeared on a video campaign against the pandemic but please let’s not drag another person down”

Following the clash in the release date, fans of both actresses are now torn between visiting the cinema to watch The Ghost and The Tout, or staying glued to NETFLIX for Omo Ghetto The Saga on the 10th of September, 2021.

The Ghost and The Tout here…

Nollywood stars Funke Akindele-Bello and Toyin Abraham were the two producers with the highest-grossing films in 2020.

Mrs. Akindele-Bello’s ‘Omo Ghetto: The Saga’ and Mrs. Abraham’s ‘Fate of Alakada,’ each grossed over N100 million in cinemas after the Cinema Exhibitors Association of Nigeria released the 10 highest-grossing films of 2020.

Speaking on the achievement, Akindele-Bello noted, “Number 1! It’s by God’s grace! Omo Ghetto: The Saga Movie is a great film, so if you’ve not seen it, it’s time to go watch it.”

On her part, Abraham said, “I’m so happy to return to this great news after a long flight. OMG! Fate of Alakada ranked 3rd on the list of highest-grossing movies of 2020 with all these top Hollywood films on the list. I just want to say a very big thank you to God whom all praise is due, my team, my ever loyal fans, Toyintitans, and to everybody who made this happen by going to the cinemas tirelessly! ?sé mo dúp?´ ó! I love you guys much! God bless you all, 2021, let’s do more!”

Amidst criticisms, Toyin Abraham shares video of a pastor praying for her at premiere of ‘Ghost and the Tout too’

‘You will always be relevant and successful’ Actress Funke Akindele prays expressly for her husband, JJC Skillz