According to Jaiye in her birthday message to Bimbo Oshin true friends are always silent with their secrets when they fight and friendship should not be based on achievements alone.

Speaking further, Jaiye said Bimbo is a good friend and she is very lucky to find her because she is a blessing.

The actress added that Bimbo is her wealth, her world and she loves her dearly.

Read all Jaiye wrote below;

“My friend is my friend whether you like it or not. I love her just the way she is. A good friend is like a four-leaf clover, hard to find and lucky to have. Having ABIMBOLA AGBEKE MI OWON is a blessing throughout that you cannot imagine. Awesome! I called her. True friends are silent with their secrets, even when they fight you won’t hear a word. Definition of friendship is not based on achievement; it is based on the fact that what we achieved belongs to both of us. She’s my wealth, am her world lobatan. Agbeke mi I love you @bimbooshin” 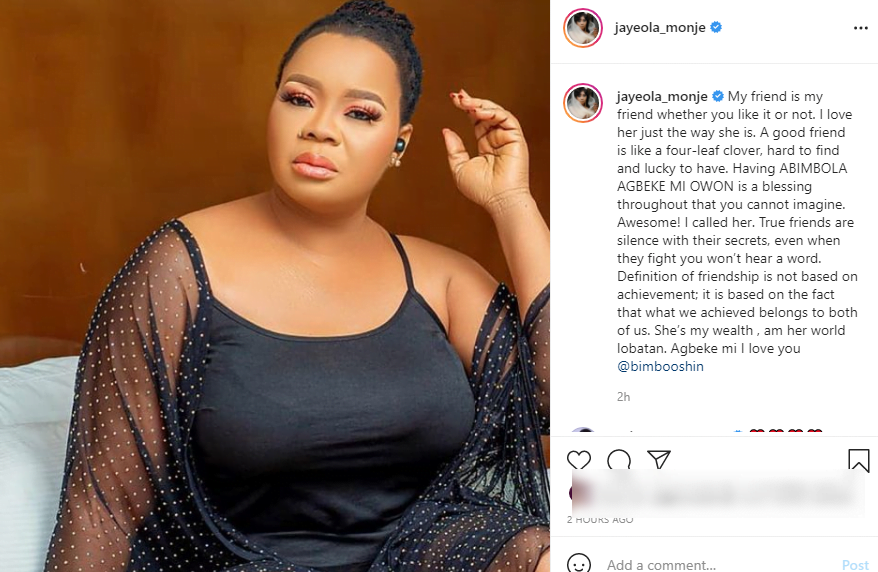 Trouble looms as Jaiye Kuti shades Iyabo Ojo and Omo Brish in her birthday message to her bestie..