VIDEO: Actor Olaiya Igwe prostrates in appreciation as MC Oluomo surprises him with a Benz 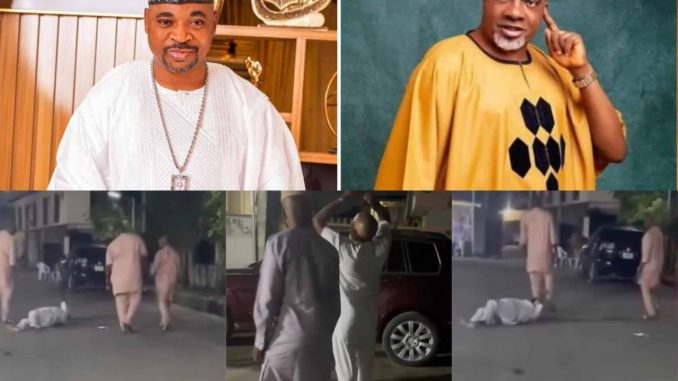 He revealed that his father surprised the actor with the car to honour him for his loyalty.

According to him, when one is loyal, they always get what belongs to them.

In the adorable video, Olaiya Igwe was taken aback and shocked as he gifted him the new car.

The actor rolled on the floor and prostrated to appreciate him for the sweet gesture.

“My dad surprised actor Olaiya Igwe with a new Benz, it’s actually good to be good”

“See how he pushed him, he was scared.

When you’re loyal you will always get what belongs to you”.

This move came after his rant on social media landed him in deep trouble with the Nigerian Police.

A video that found its way to the internet captured when MC Oluomo warned Lagosians against stopping Portable’s access to any part of the state.

Portable, present during the video session, expressed joy and happiness for the freedom of movement he gained from the NURTW boss.

Nigerians who reacted to this development claimed the singer would soon misbehave as that was his norm and character.

Another video that emerged from Portable’s visit to MC Oluomo captured Olaiya Igwe recommending the singer to the Lagos state transportation boss.

According to the veteran actor, Portable is a generous man who has taken after MC Oluomo’s generosity and principles of giving even when you don’t have enough.