VIDEO: Actress Iya Rainbow in awe of God as the unexpected happens in her church(WATCH)

The actress who doubles as the father of a Cherubim and Seraphim church in Ojodu area of Lagos, couldn’t believe her eyes as God blessed her church with an unusual baby.

In a video she shared online, Iya Rainbow showed off the baby who was born with “Allahu” on both ears.

“We that we are Christians. If there is no Muslim to see that Allahu is written on both ears, if your eyes aren’t paining you, you will see the inscriptions. This is what the Lord has done for us”.

News recalls Iya Rainbow couldn’t help but shed tears after she saw the standard of living of a family of four living in a flooded house.

The veteran had watched a video by Kokun Foundation which showed how some Nigerians were living and fighting to survive in this dwindling economy.

The video showed a father with his three kids living in a one room apartment filled with water.

The family only had their bed to rely on during the rainy season as their room had been filled with water.

Sharing a video of the poor living situation, Iya Rainbow cried out over how the number of people in hardship keep increasing.

She also noted how hunger in Nigeria have become alarming. 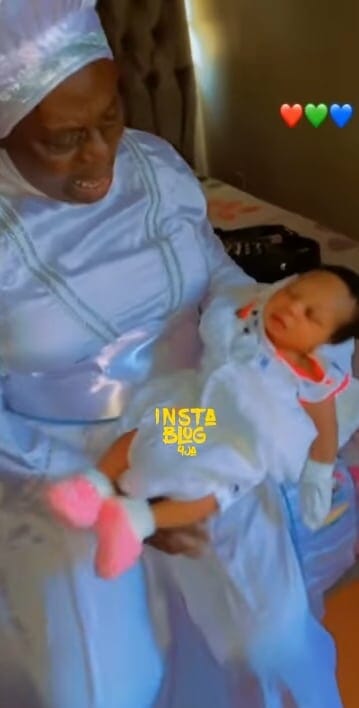