A video of Nollywood actress, Iyabo Ojo seductively dancing with Fuji singer, King Wasiu Ayinde Marshall popularly known as Kwam1 has made its way to the internet. 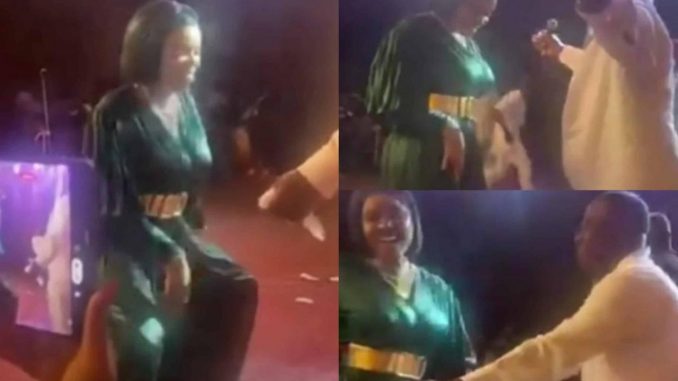 The video is currently on the lips of many as they dragged the actress for her questionable dance steps.

News reported that Nollywood industry stood still for Kwam1 as he marked his 50 years on stage.

KWAM1 held the event on Friday, August 19, at the prestigious Oriental Hotel, Lagos.

The Yoruba movie industry stood still for the singer as they came out in large numbers to support him.

Also in attendance were different monarchs and billionaires.

Eleganza CEO, Razaq Okoya and his beautiful wife, Shade Okoya, were spotted at the event as well as silent billionaire, Sir Olu Okeowo.

A video from the event has made it way online and has set tongues wagging.

Iyabo Ojo took to the stage to dance with singer.

However, her dance steps which many termed as ‘seductive’ has gotten many questioning her motive.

goldbaby17: I’m embarrassed on her behalf

bibi_trendzz: Shay she dey try seduce the man abu wetin be this dance

jaded_by_jade09: This one na hook-up dance

everlywhyte: No be seduction be this…. The place I see that hand ehh. .. abeg make I pass

The comic actor was the night’s host, and being his usual self, Lateef kept the guests laughing.

Lateef, who is very good at singing, thrilled the guests with his special rendition.

The actor serenaded the legendary singer with melodious songs.

Emmanuella Ropo, Femi Adebayo, and others took the stage to rain money on him.