VIDEO: “Jesus will do mine” – Toke Makinwa says as she meets Mercy Chinwo and husband

Popular media personality, Toke Makinwa, has taken to social media to share a video which captured the cheering moment she met gospel singer, Mercy Chinwo, and her husband, Pastor Blessed. 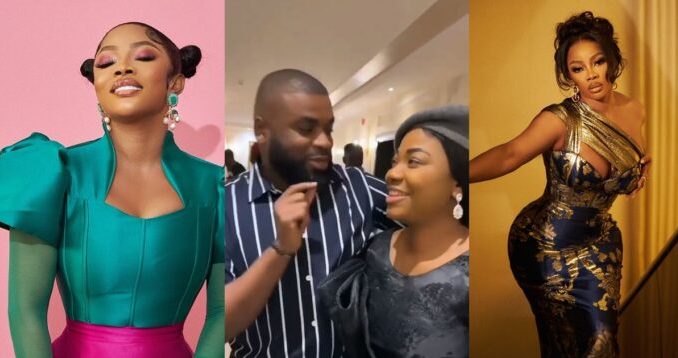 The beautiful show host met the couple who just had their wedding a few weeks ago at an event last night.

In the video that was shared on Toke’s Instagram stories, she’s seen gushing over Mercy and her husband. Beaming with a smile, Toke Makinwa told Pastor Blessed that he’s blessed to have Mercy Chinwo as his wife.

Following Toke’s kind compliment, Pastor Blessed described how he and his wife met.

Inspired by their story, Toke Makinwa declared that Jesus is going to do hers too.

Meanwhile, Toke Makinwa has compared herself to her aunties, whom she used to criticize for being unmarried in their 30s.

Toke Makinwa, in the latest episode of Tokemoments, spoke about watching her aunts live with her family when she was a child and how she often questioned why they were single and not in their husbands’ houses at that age.

According to the 37-year-old, as a young child she believed her aunties were unmarried at 30 and living with them because they were promiscuous.

Toke says she feels she has now become those aunties as she is 37 years old and still not married.

“Jesus will do mine” – Toke Makinwa meets Mercy Chinwo and husband