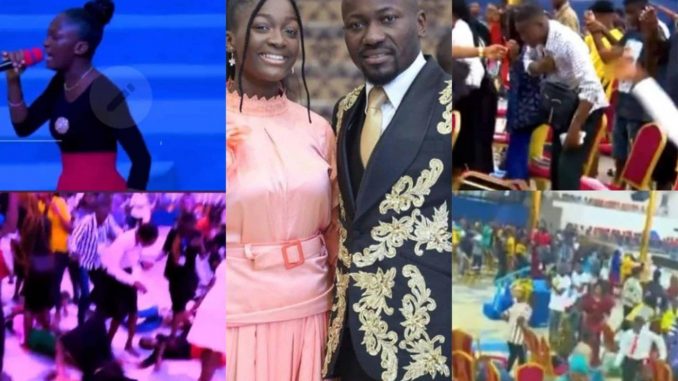 A video which is fast making rounds showed his daughter on the altar conducting deliverance for the youths and teens of OFM.

The ministration was so powerful that half the congregation was under the anointing.

In the online video, many who caught the anointing fell on the ground, rolling, weeping and speaking in tongues.

The trending video has sparked mixed reactions on social media.

Many avowed that it was all cooked up and fake.

biebele_ajijola: Out of the mouth of babes

visdaughter: He don teach her how to lie Abi?

melvinn.attah: Holy spirit were no catch camera man that one na Holy Spirit? Dem no born u well to fall with million worth of camera, na u and Holy Spirit go refund the money

News recalls Apostle Suleman was embroiled in a scandal last month over his relationship with Nollywood actresses.

Amid the allegations and the issues between Halima Abubakar and Apostle Suleman, Gist lover, via its page, dropped the names of some Nollywood actresses who the blog claimed had slept with Apostle Johnson Suleman for money.

Reacting, Apostle Suleman said he had been busy with his church crusade and said he would be the end of Gistlover’s blog.

He added that the list of actresses mentioned was not long enough, urging the blogger to make it longer.

He described Gistlover as a fool (ode) for dragging him like a generator.

Speaking further, Suleman declared that he would be the one that would disappear from the gossip blog as the owner of that handle had entered his trap.

NB had learned that the famous pastor was making moves to unravel the blogger’s identity.

Suleman was reported to have said that revealing Gistlover’s identity would save thousands of politicians, clergymen, leaders, actors, actresses, and businessmen from future blackmail.

The preacher was set to reveal Gistlover’s name, pictures and families very soon.