“We wanted to help her but she would rather trust in God” Pastor to late Osinachi Nwachukwu breaks silence, spills more about her death

Nigerians woke up to the news of the sudden death of one of the country’s best gospel singer, Osinachi Nwachukwu popularly known for her song ‘Ekwueme’

As many still tried processing the cause of her death, reports surfaced online that the singer died form domestic violence.

According to the reports, Osinachi had been dying in silence with the constant beatings she got from her husband.

Following the news, many attacked her church for not saving and protecting her life.

Nigerians took to comment sections to question where her pastors were when she was facing such challenges.

Finally one of the pastors and counselor to the late singer have spoken out.

Pastor Chioma Ibieze claimed that Osinachi didn’t want anyone to interfere in her marital woes as she held unto God to solve it.

The female pastor recounted how God opened her eyes to the challenges the singer was facing and when she spoke to the deceased, she opened up to her in tears.

Pastor Chioma noted how her death could have been averted but she chose to die in silence, to endure the abuse, the pain and the sorrow.

According to the pastor, she begged, pleaded and counseled her but she tuned a deaf ear and kept enduring it because she was trusting God to help her.

She wrote, “REST IN PEACE MINISTER OSINACHI! The very first time I hosted this Angel, God opened her up to me like a television and she wept like a baby as she confirmed all and said even much more. She opened up to me and his absolutely nothing. She confided in me till last week. I just don’t want to talk! She died prematurely! It could have been averted. The wickedness was so much. She died in silence. She decided to endure the abuse, the pain and now DEATH! I begged, I pleaded, I counseled, but her “NICE HEART” kept enduring the abuse thinking it will be better rather it go worse. I could not go contrary to her wish as a counselor. She wanted absolute privacy trusting God to help her and now death. I have not slept all day! I have said it, NOBODY SHOULD EVER STAY IN AN ABUSIVE MARRIAGE. FORGET WHAT PEOPLE WILL SAY, THEY ARE NOT YOU. YOU HAVE TO SAVE YOU FIRST. I AM SO SAD!”.

News recalls some friends and acquaintances of late Osinachi Nwachukwu dropped a bombshell about her death.

One Gold Martins, in a post shared on Facebook, alleged Osinachi was suffering domestic violence in her home and had confided in some friends about what she was going through at the hands of her husband.

However, being a gospel minister, Osinachi Nwachukwu was afraid of what the world would say if she ended her marriage after four children.

Gold Martins alleged that the church would not be ignorant of what Osinachi Nwachukwu was passing through in her home, stating that if she could tell a total stranger, then her pastor must be aware.

Another Facebook user Gloria Solomon also alleged that she hosted Osinachi Nwachukwu for a program in 2019, and it was a terrible experience with her husband when she arrived for the programme.

According to Gloria Solomon, the late gospel singer shared scary marital issues with her and how she had to sneak out of her home to honour the invitation.

She added that Osinachi’s husband threatened her on the phone and assured her that his wife would not return to his house.

Others who also reacted to the viral post on Facebook affirmed that Osinachi’s husband abused her and had kicked her in the chest, the reason she was hospitalised and died after five days of being on life support. 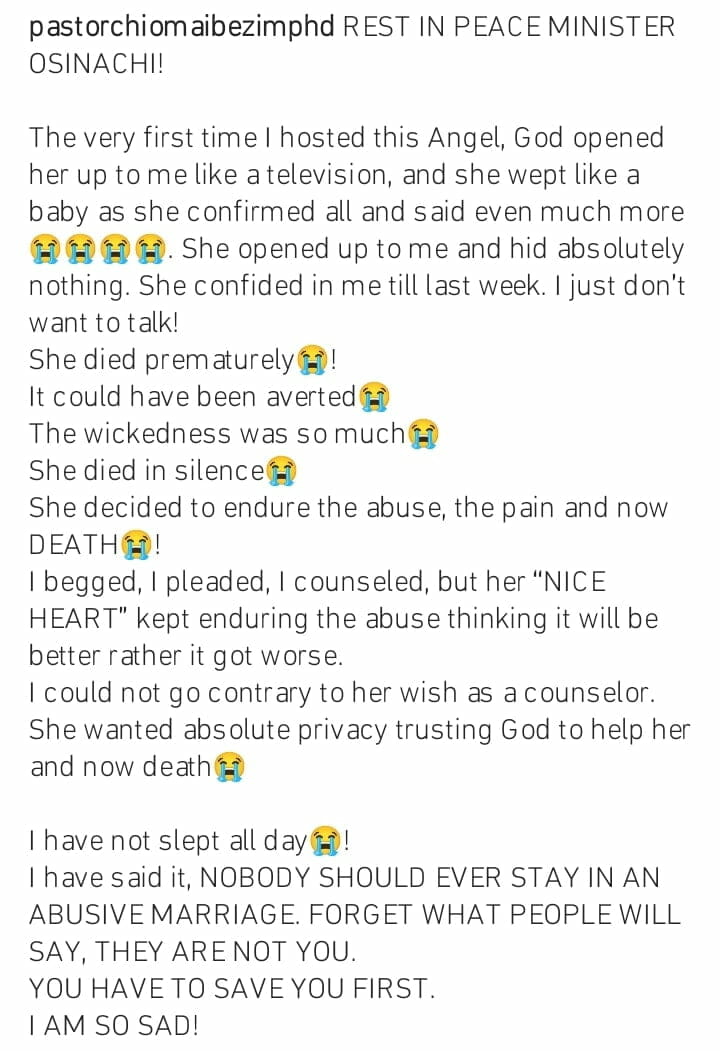 “We wanted to help her but she would rather trust in God” Pastor to late Osinachi Nwachukwu breaks silence, spills more about her death